Engadget managed to get an exclusive hands-on with the device known as the Motorola Droid X, and one of the features on the phone has some people wondering whether the device is actually sporting Android 2.2 already. What's more, Droid Life is reporting that a source of their is pointing at July 19th being the launch day for the Motorola Droid X.

After their session with the Motorola Droid X, Engadget told us their impressions. They thought that the device felt larger, lighter, and surprisingly solid. A "super crisp" and "mighty responsive" 854 x 480 display (larger than the HTC EVO 4G) was also reported, but the author was unable to substantiate the claim.

The method for picture taking on the camera was lacking, but the 720p video playback was smooth. The Droid X also sports a "fast and responsive" multi-touch keyboard and possibly a 1GHz ARMV7 processor that keeps everything fairly snappy.

EuroDroid comments that the phone "looks ridiculously big, especially in the hand of Engadget’s lady blogger. We’re starting to think that this endless pursuit of bigger and bigger smartphone screens is a complete waste of time – it makes them less portable and more power-hungry, the two most mission-critical features of any good mobile phone."

Androinica adds that "The DROID X is also running a newer version of MotoBlur (could be ‘Ninjablur’) on Android 2.1 that isn’t so “in your face” as the previous incarnation."

Head over here to check out their gallery and hands-on videos.

As for the possibility that the phone will sport Android 2.2, AndroidGuys wrote that:

Notice the widget circled in green. Recognize it? It's the same widget Google introduced with Froyo (see 2nd pic).

It could just be that Ninjablur, which will be Motorola's custom UI for the droid X, was given this Android 2.2 widget independently of Froyo. However, since the AOSP version of 2.2 has yet to be released, I find it hard to believe that this is the case. Then again, that could also mean that Motorola doesn't have Android 2.2 to actually develop with.

Image from the AndroidGuys article: 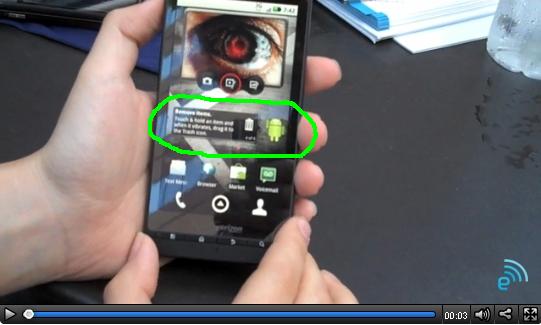 DroidLife has received word that Verizon stores are placing t-shirt orders and preparing for a fully staffed early opening on July 19th for the release of the Droid X. They also claim that Verizon will make their official anouncement next week. Unfortunately, they don't have any evidence to back up their claim, other than the fact that they have been the source for other leaks regarding this device.

TalkAndroid wrote that the "Droid X, with its 4.4in screen, is without a question, Motorola and Verizon’s answer to the HTC and Sprint’s HTC EVO 4G. "

Image from Engadget and AndroidGuys