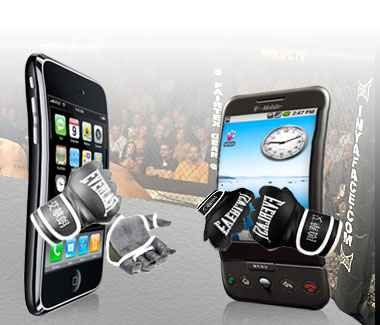 Digging in the wrong place?

The case will probably come down to those details, as HTC (watched by everyone else) tries to squirm around the patents and probably ends up handing over a significant sum of money following the best part of a decade of action. Apple is demanding triple damages for knowing infringement, along with all its fees - which is, no doubt, one of the reasons Cupertino chose to fight this battle in America.

There's also the fact that an American innovator facing a Taiwanese adversary is going to get local sympathy, though why Apple has selected Delaware (rather than the even-more-patentee-friendly Texas) remains a mystery. Apple could have launched the case in Europe, but that would have required legal action in each country, while going to Taiwan would be taking the action to the opposition's home ground.

We can speculate as to why Apple has selected HTC rather than Motorola or even Google itself (who, as sales agent for the Nexus One, is equally in breach). Google has a lot of money; it's also an American company so there'd be no local sympathy, but it's the money and the patent pot that will have pushed Apple to select a weaker target.

Given the number of patents filed by Google, Apple is almost certainly infringing some of them, which would make for a bloody war unless they already have some sort of signed licence agreement in place. Such an agreement is likely to exist, and would muddy the legal waters if the companies came to blows. The same problem probably applies to Motorola: Apple would swiftly find itself on the receiving end of a responding claim if it tackled either of those companies, so HTC is a much softer target.

Not that HTC doesn't innovate: the company was responsible for some of the first Windows Mobile handsets; including the Xda and Xda II, and innovated in remarkable ways to get the handsets to work. But HTC hasn't the history, or the culture, to hold a huge patent portfolio. A quick look at the EU patent records shows that HTC only has 127 patents, some of which are clearly not computing related, while a search for "Apple" lists 1,453 patents.

Apple is targeting HTC, in the USA, but the patents on which the claims are based could be applied to any Android handset in the world, and almost certainly (in part at least) to any other smart phone platform. Some of the patents specify a device with a built-in screen, or battery, or touch-sensitivity, but some are generic enough to be applied to any computing environment.

The case will take years to resolve, but that's no bad thing for Apple: manufacturers are going to be hesitant to create Android handsets when an Apple victory could put them out of business, a long drawn-out case could threaten the future of Android just as much as an Apple victory.

The winners, therefore, will likely be Symbian, RIM and Microsoft, as long as Symbian can depend on Nokia's stack of patents for defence. Microsoft has its own stack with which Apple wouldn't want to tangle, but anyone less well equipped would do well to get out of the mobile business while they can.