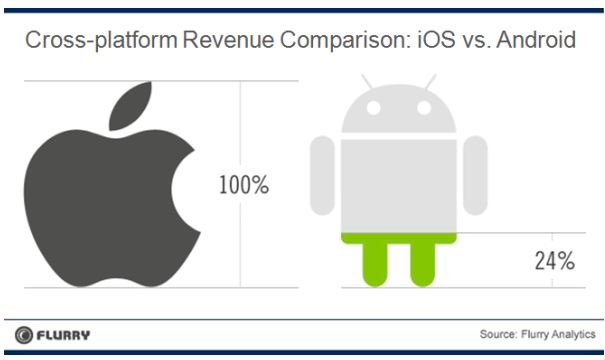 With worldwide app downloads at one billion per month, you'd think Android Market would be attracting hordes of talented developers, but you'd be wrong. While it's true that in some sense Android is still the platform with the most momentum, according to new data from the Analytics firm Flurry, developers would much rather create apps for iOS.

Flurry has estimated that roughly 75% of all the developers they monitor would rather develop apps for iOS than Android this holiday season. The firm studied new project starts for 2011, during which developers set up analytics for approximately 50,000 apps. Of those apps, only 25% are being developed for Android, which is actually less than the percentage in Q1 2011, when 37% of new apps were being developed for Android.

Developers complain that they can't make as much money on Android, and Flurry's numbers back up this claim as well. As far as in-app purchases are concerned, Flurry estimates that for every $1.00 generated on iOS, the same app will generate $0.24 on Android. But these are in-app purchases we're talking about, not total costs including purchase of the actual app.

There are other holes in Flurry's claims. For one, they only monitor about 25% of all apps in Android Market and Apple's Appstore. Still, it's hard to shake the feeling that Android could have higher-quality apps if only developers were able to generate more cash from them. Could it be because Apple forces users to associate a credit card with their new iPhone while Android does not? Why do you think people spend less on Android apps?

Apps Apple
Never miss a story with NextPit via  Telegram 📲!