Deciding to learn to develop mobile applications for the Android operating system was an easy one, getting to grips with the ins and outs of Android was not quite as easy and adding GeoPoints to a silly MapView proved bothersome. Past that I'm glad I started and I'm looking forward to learning more. I definitely feel that if you know some JAVA already then a week or two and you'll be flying. That's what I'm hoping at least!

Long time JAVA coder, first time Android developer and the transition hasn't been without confusion and frustration sprinkled with a great deal of satisfaction.

Having decided that I wanted to get experience in mobile application development, Android was the only way to go. I don't have a Mac so getting on board with the iPhone was a no go unfortunately, even though I have an iPhone handset. Straight away the difference between Google's approach to the Marketplace and Apples approach is the sheer simplicity of getting your first app submitted and onto people's handset. Absolutely Magnificant.

It took 1 full days work between deciding to give it a go, picking an application to start on and uploading version 1 to the Android Marketplace. I was delighted, and seeing the number of downloads creep up is even more satisfying. The target audience of the application is limited, (people in Ireland looking for petrol or diesel prices near their location) but my goal has been to work at learning the ropes and move on from there. 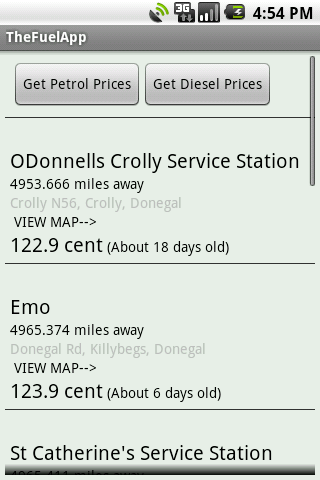 I have been doing development with JAVA for many years now, but even then, getting to grips with Android hasn't been plain sailing, my primary conclusion being that the online API and documentation provided with the platform is lacking and what is available seems disjointed somehow. I ended up googling endlessly to find answers. I'd love to see something like PHP's manual with user submitted content going along with the API documentation (eg. http://www.php.net/manual/en/language.types.string.php).

Anyway, currently a book on Android programming is winging its way from Amazon, whether it'll be any good remains to be seen but in the mean time I'll struggle on with things such as the following question that really stumped me today. How to you add OverlayItems (points on a MapView) after the MapView has been created. Does it have to be done in the onCreate method of the MapActivity? I couldn't find one example where the points were added somewhere else. I'm only at it a few days so I don't expect to know everything but creating a new MapActivity via the new Intent() constructor left me totally confused as to how to get in my GeoPoints. Not to worry, live and hope to learn I guess, hacked my way through, coding elegance can come later so I'll happily colour outside the lines for a while.

But that was one example of how looking through the documentation left me none the wiser unfortunately.

All-in-all my first day or two developing with Android, while it has been a steep learning curve has been pretty productive as far and predominantly postiive. I'm looking forward to actually getting an Android device and being able to use any applications I develop. Yes, I don't even have an Android device, yet thanks to Open Source developments and the great tools available like the Eclipse IDE and Android Emulators you can develop and not have to spend money straightaway on a new phone.

Granted, for more substantial applications testing on a real phone is essential, but for the moment, I'll to chug away as I am and when I can afford it I'll get myself a secondhand phone to play with.