BoyGeniusReport received a tip and photos from one of their informants inside Verizon Wireless regarding the rumored Droid Pro, Motorola tablet, and a Motorola world phone that they originally leaked last week. The leak includes pictures from inside Verizon's inventory don't show much besides model numbers and some short descriptions. 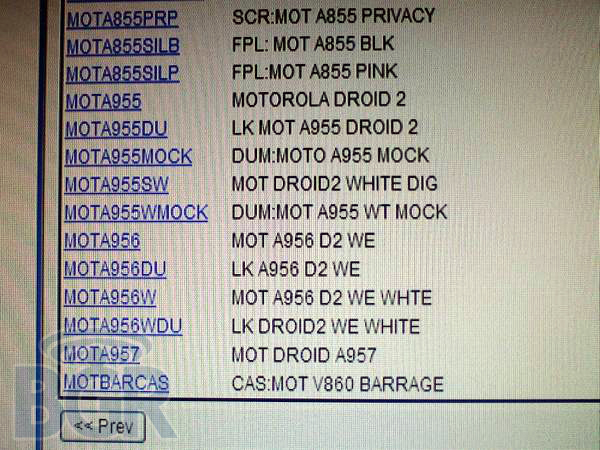 BoyGeniusReport writes that "the Motorola DROID Pro, the handset with a 4″ display, 1.3GHz CPU, and global roaming capability gets the model number A957, and is set for a November launch."

The Droid 2 also appears to be coming in a "world edition" variant that will allow for global roaming, "and it looks like that device will launch relatively soon with the model number A956."

AndroidGuys mentions that "adding Global roaming capability to the Droid lineup is a critical step in gaining acceptance from the business crowd, while adding black and white color choices appeals to those looking for a color choice.

BoyGeniusReport had this to say about the MZ600 also listed in a photo:

Moving on to the Motorola Android slab device — it’s listed and we’ve found the model designation — MZ600. We aren’t able to definitively confirm at this time whether this is the Motorola tablet (unlikely just yet) or just the slab form factor device we reported on (much more likely). If it’s the slab touch screen Android phone, it should launch with Android 2.2 and also be a World Edition handset. It looks like there are over 170,000 of those devices on order from what we can see.

Engadget adds that the MZ600 tablet is "probably just VZ's lingo for the slate-style touchphone that was included in BG's earlier rumor, and not some sort of iPad-slaying Android monstrosity."

MobileCrunch reminds their readers that "there are no official dates for any of this stuff, just inventory placeholders, so don’t call the president just yet."

Head on over to BoyGeniusReport to check out all the photos and coverage from the source.