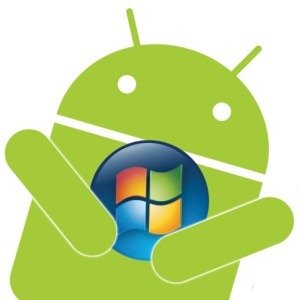 "The most interesting tablet we've seen here in Barcelona"...At least that's what Engadget had to say about it after getting their hands on it. So what's so interesting about this mysterious device? Well, the device is a tablet/netbook, and was demo'd by Intel to more demonstrate processor power vs design. With that being said, while it might not win any beauty contests (fugly), what does indeed make it very interesting is the fact that this tablet/netbook is running both Android Gingerbread AND Windows 7.

If you read my article about Android's next version, Jellybean, being a direct response to Windows 8, you can see why this interesting device could possibly be the foundation for how Google could strategically fight off competition from Microsoft. Windows 8 tablets will have an advantage that Android tablets and iPads don't currently have, and that's the ability to, on paper, be a COMPLETE latop replacement. IF, and I say that with pure speculation, Android Jellybean does in fact give you the option of booting Android AND Windows 8 (yes, that is the rumor), it could have a serious advantage over tablets only running Microsoft's newest OS. The Novero Solana, although only really a hardware showcase, gives us a very alpha-like example of what that could be like.

So let's get the obvious out of the way first..this is NOT a pretty device. Here are a few pics (pictures from Engadget): 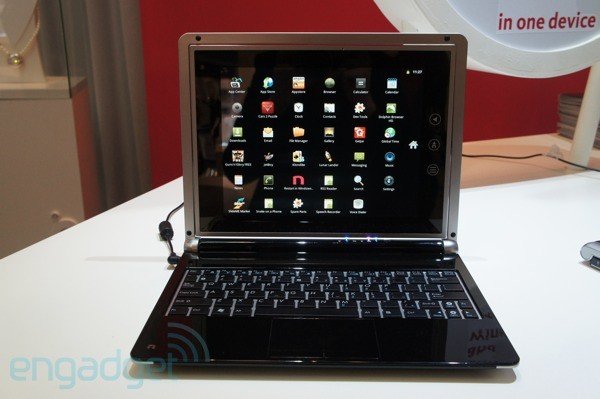 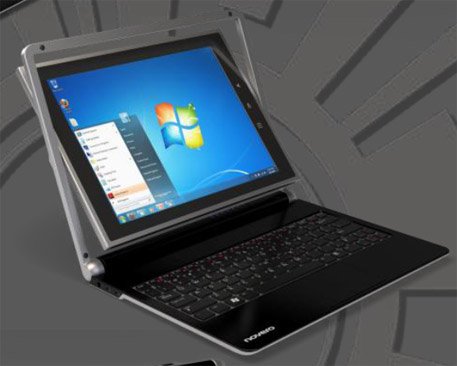 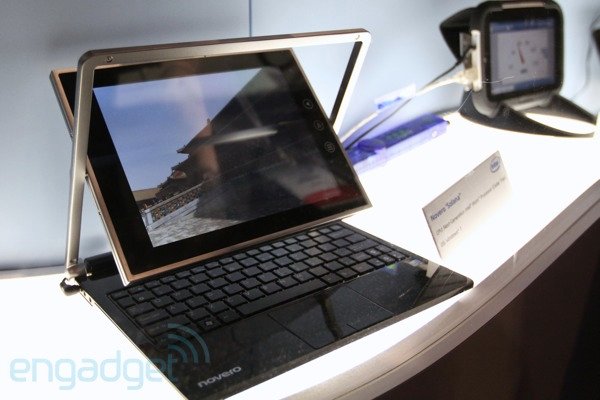 Umm...yeah....not really that pretty on the eyes is it? It's like a laptop, but then has this flipback hinge folder thingy (that's the technical term) that allows it to become a tablet. Spec-wise, here's what we're looking at:

Specwise, I wouldn't mind seeing this devices insides packed into a tablet, as it seems to be running some solid hardware. But again, this isn't an article on how awesome this thing isn't to look at, but the fact that it dual boots Android and Windows 7. To boot between Android and Windows, you simply need to double click on a desktop shortcut to start the transition. Engadget reported that currently, this process can take up to a minute, but that on its release it should do so in only a few seconds. Once it finishes the change, you'll see Android on the display and can begin to swipe between screens. The touchscreen is reportedly very precise for Android and Windows and makes transistions quickly. The device currently only runs Android Gingerbread and has no Android Market, as Novero are still negotiating possible market access. Nonetheless, as silly as this device looks, you could begin to get a taste of what a Android/Windows powered device could be like.

I showed a demo video from Youtube a while back ago showing a very sleek Samsung Windows 8 tablet. I won't lie..it was awesome, and apparently Samsung, Acer, HP, and Nokia are all confirmed to be working on Windows 8 tablets as well. If a proper method of linking Android and Windows 8 could be found, this concept could be an all out game changer, and I for one would be very anxious to see the end result. Forget about this tablet/laptop thingy here..nobody expects it to sell, especially considering it will be selling for 700 to 800 dollars. But the idea behind it, and the concept of combining Android, the worlds most popular mobile OS with the Godfather of PC operating systems on one device would not only be an impressive device in itself, but one that could definetely appeal to mass consumers.