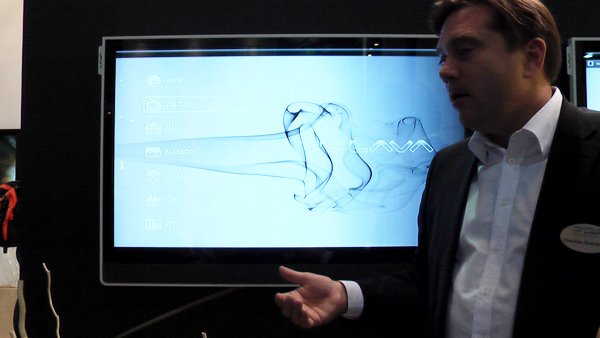 The Scandinavia does not have the Android Market support, but the CEO told us that their company had received hundreds of requests by app developers to make apps for their televisions, so they should have more apps available on their market soon.

Some of the apps that were already on the television were YouTube, Facebook, FLixster, and Twitter, as well as a full email client with Microsoft Exchange support, and Google Maps.

Check out our video of the Scandinavia and hear what the CEO of People Of Lava had to say about it:

The Scandinavia will launch with three controllers, the one shown, a full QWERTY keyboard, and a simple controller "with arrows and an OK button for basically, pointing and selecting."

The cost of the Scandinavia might be its biggest downfall, with the 42" model expected to sell at roughly 2500 Euros, with the 55" model retailing at around 4000 Euros. The Scandinavia should start selling in October, and here in Germany in November.

Poll of the week: Is it time smartphones stop getting bigger?
80% of apps lie about data handling: Are Apple's privacy rules too relaxed?
Free apps for Android & iOS: These Pro versions are currently free

Tip for Samsung Galaxy users: This setting can keep your data safe
It's official: The Samsung Galaxy S22 will be unveiled soon!
How to fix the Speech Services Waiting for network connection notification