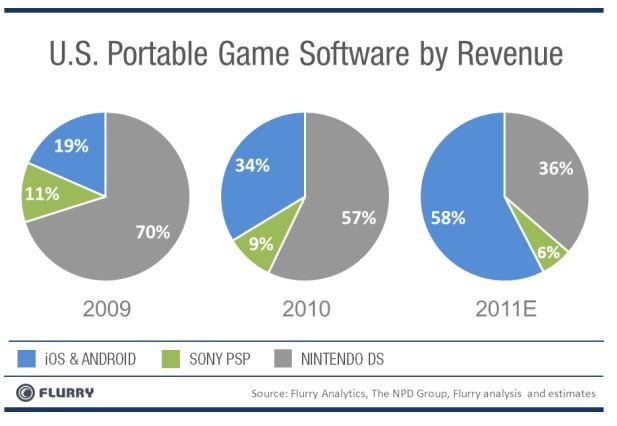 In addition to stealing ad revenue from websites, it looks like iOS and Android just stole a mountain of software revenue from handheld gaming device companies. According to mobile analytics firm Flurry, in 2009, Sony and Nintendo held 81% of handheld revenue. Just two years later, that number now hovers around 42%, with over 58% of revenue coming from titles released for iOS and Android.

Granted, we've been talking about the end of consoles for months now, and plenty of folks have argued with us that it'll be a matter of time before phones truly catch up to dedicated gaming devices in terms of capabilities and quality software. But it has become a matter of when, not if.

Nintendo, for its part, has refused to design games for iOS or Android, telling reporters that the idea of the company creating games for smartphones is "absolutely not under consideration." We'll see if they change their mind once this quarter's revenues are in.

Sony, for its part, has been less cautious, releasing the Xperia Play – the first Android with console hardware – as well as a bunch of mobile-enabled games.

While it's true that Android games vary greatly in quality, I'm still impressed by the fact that those crappy Snake games we were playing on our Nokia bricks some 5 years ago have morphed into the 3D color shoot-'em-ups and smash successes like Angry Birds we know and love today.

And they can only get better...


Will Nintendo Ever Come to Android?