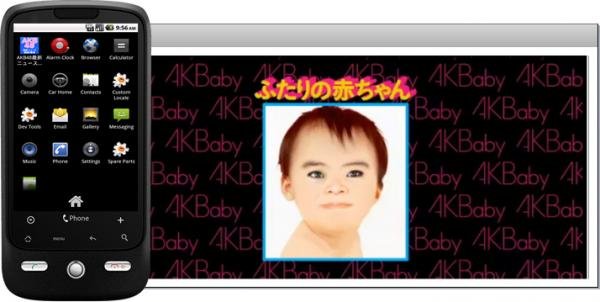 Today in bizarre Android news, it seems evil malware has infected a popular Japanese girl band app.  Every year fans of the girl's group AKB48 download an app to vote for their favorite singer. The competition is quite heated, as AKB48 is made of over 64 members.  Usually, the winners then record a single together, but this year the app that allows fans to vote was infected with some truly terrible code.

The malware systemically destroyed all pictures and images on the devices of fans and replaced them with a creepy picture of a man baby, as seen above. The malware-infested app was allegedly pulled from Google Play promptly, but a few unfortunate souls downloaded it from a third-party source.

I have a few angry thoughts on this.

First of all, that's a creepy ass baby. Secondly, this is obviously terrible. Having your phone infested with some alien code is bad enough without your photos getting gobbled up. I've heard of malware that sends spammy text messages and malware that records your locationn information, but malware that steals your photos? What's wrong with these people?

Dudes, I know you think you're being hiiii-larious but you're really just losers. Cut it out. This is why Android can't have nice things.