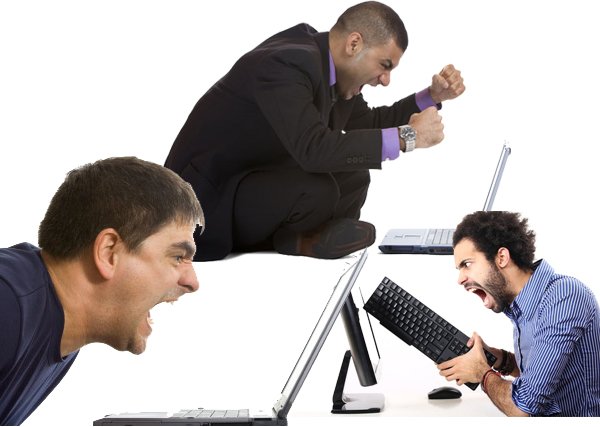 "I can't help but imagine Windows tablets rising up to finally overtake Android, and creating a Microsoft-Apple battleground for the next decade". That's what Scott Stein from CNet had to say about Windows 8 tablets, which led to an interesting Skype chat between myself and 2 of my colleagues Kamal and Fabien (co-founder of AndroidPIT) on the impact of Windows 8 on Android tablets, the iPad, and PC market as a whole. We all found the conversation fun and interesting, and decided to share it with our readers below:

Eric McBride: The storm is coming...http://news.cnet.com/8301-17938_105-57388847-1/windows-8-could-leapfrog-android-to-be-the-true-ipad-competitor/
Kamal: naaaaa..i dont know, doesnt really overwhelm me. pretty nerdy "greatness“ their talking about. And also, its for tablets
Eric McBride: :) Your gonna see man. This tablet, if the price is right..is gonna be a game changer.
Kamal: Well, I dont think its gonna be a game changer, more of a gamer inspirer.
Eric McBride: Both. A tablet that can COMPLETELY replace a laptop is a game changer, as no tablet has managed to accomplish that. This one can, which will inspire Google and Apple to try the same. But Google and Apple dont have directX for letting you play pc games on their hardware, they dont have windows drivers for game controllers and printers, they dont have THE microsoft office suite. They will have to seriously innovate to compete with this thing. I think they both can, but its gonna be tough.
Kamal: hm, yeah, thats true. healthy new competition. But I still dont see people giving up there affordable laptop for a probably very pricy tablet. A laptop is still something very different. Its kinda like with stationary PCs and Laptops. The didnt replace them, they are a new thing you use. So I dont believve to much in that this will be in any way a problem for Android or iOS.
Eric McBride: If Google is smart.they will have samsung build tablets that can boot both windows 8 and android jellybean. THAT is how you do it
Kamal: I think your right that it will bring some really good and healthy competition to the game, but in my eyes that will be it for now. They cant really harm the other companies with releasing one tablet. And most of the users wont even know the difference from the features of an android device to a windows tablet, besides the different OS of course.
Eric McBride: But you forget one thing..Microsoft will do with their tablet what Google doesnt..
Eric McBride: and thats market the HELL out of it. That you can believe
Kamal: thats true. But its still just a tablet ;) They say the same BS about every new tablet thats coming out. What I really cant hear any more is: "This is the real competitor for the iPad". Boring
Eric McBride: its NOT just a tablet! I ve seen sooooooooooooooooooooooooo many tablets....but you ve never seen me react towards one like this one. I have my reasoning man :) This is the only tablet in the current tablet game that will be running damn near EXACTLY the same specs as a PC. Its a laptop killer! Forget the iPad!
Kamal: ok. Im predicting: It wont kill the iPad. Why? Because people that buy the iPad buy it for a very specific reason. And that is not only a matter of power/technology, but its a matter of prestige. The way Apple is able to market their products is almost a religion, and its something that people feel. And a new, even better product by a competitor will not change that, because its not that people "think" that Apple is better, they "believe" it.
Eric McBride: Very good point..and I dont think it will kill the iPad either. NOTHING will kill the iPad. Its has too much of a cult following, just like Android does. What it WILL do however is seriously eat into its (and Android tablets) market share, and the reason for that is that it creates a new option for consumers. When consumers walk into a store to buy a tablet now, the iPad comes to mind...NOTHING will change that. But imagine if now..they walk into a store to buy an iPad...but then all of a sudden, theres a tablet that costs the same as an ipad (hopefully..although it will probably be more) that runs something that everyone who has ever used the internet knows. Windows. And not just any Windows, but Windows 8 tablet UI, and the Windows desktop that we all know and use daily. And then they will see advantages..."this tablet i can plug my printer into, use Microsoft office, and play the SAME games on that I can with my laptop.Isnt it more practical to buy this one?".Theres where they have advantage.Also Kamal...some people WOULD give up their laptop for this device, because with a docking station, it IS a laptop. Its not like an Android tablet or iPad with a keyboard. Its a COMPLETE laptop.
Kamal: That again is true, IF you need a laptop with those specs and a tablet. For me, as an example, I wouldnt want to pay around 1000 euro (for everything, docking station, hard drive etc) for something, that will still have less power then any laptop for that kind of money
Kamal: One of the things I kind of disklike about the transformer prime...
Eric McBride: Microsoft is out of their mind if they price it that high. But if its 600 to 700 euros, I would most likely buy one, and I could imagine it replacing my laptop. It's just too practical for me to ignore as a device ….unfortunately. And..if Android Jellybean rumors are true, maybe we see a tablet running android 5.0 AND windows 8. THAT would be EPIC.

Fabien Röhlinger: Guys, new aspect: You are both right!
Eric McBride: LOL
Fabien Röhlinger: Kamal says: It won't be an iPad-killer. And I agree. It won't.
Kamal: Hell yeah...
Fabien Röhlinger: Eric, you say: It will be a game changer. Yes, Windows 8 will.
Eric McBride: I dont think it will kill it either...but i think it will eat away at its market share enough for apple to notice.
Fabien Röhlinger: But not because of tablets. They will be far too high priced in the beginning.The big game changer is the operating system for PCs.
Kamal: Yes, thats what I could see happening too
Kamal: Its not one tablet thats the game changer
Fabien Röhlinger: When M$ will change it to Windows 8 and will provide the upgrade for very little money (and this will happen), people will get used to the system.Thus, we might see the "Apple-phenomenon". People could just say: "Hey, I use Windows at work, I use it on my home PC - why not shifting to tablets and smartphones as well"
Eric McBride: I totally agree Fabi. The concept BEHIND the tablet is whats the game changer. Its hard to do, but it could fail if consumers cant stop seeing this device as a tablet, cause its not. Its A LAPTOP: same specs, same apps, same programs, same drivers, same everything, and its the FIRST of its kind. If and I say IF this tablet enters the market at 700 dollars or less, it could seriously hurt Android tablets AND ipads, cause they simply wont make as much sense anymore. Why buy a tablet that runs apps, when you could buy a tablet that runs apps AND windows 8? Better yet, especially if it could run Android apps (Jellybean) AND Windows 8?
Fabien Röhlinger: I would like to outline that this will only be the case for non Apple-users
Fabien Röhlinger: Believe me: People will see it as what it is - a tablet! If they would like to have a notebook with Windows, they could purchase an Ultrabook
Eric McBride: Not if Microsoft markets it properly. Netbooks sell, but don't sell mind blowing numbers. My girlfriend only bought hers because of the size and it being easier to take to university. If it werent for that, she would prefer her laptop everytime. She notices the extra power in her laptop, and shes no tech junkie. For her, as a consumer example, a Windows tablet would make a lot of sense.
Kamal: I have to disagree with you, Eric. People will not see it as a real alternative to a laptop. Why? Simple beacuse when this gets out, Laptops /Notebooks are already available, that are better. Its still "only" 10 inches big, which is not an alternative for anyone really working with a "laptop". If you need a smaller device just for writing end stuff, why bother spending so much money on a thing like that? I just dont see it happening at all
Eric McBride: Ahh...but you forget....
Eric McBride: since it has the same specs as a laptop, you can easily plug in another monitor ;)
Kamal: but its a lot more expensive.I dont see the benefit.
Eric McBride: how do you know its more expensive? :)
Kamal: Because it will be. Im sure about that. Its a highend tablet.
Eric McBride: I agree that Microsofts pricing could be the determining factor here. They know good and well that specwise and OS wise, it can compete with any tablet on the market. They have ONE chance to do this right. In the past they ALWAYS mess up pricing...but they actually (for the first time in a while) hit it right with the Lumia, and MUST hit it right with this.
Eric McBride: Ok...so lets get a final word...my final word: its a potential laptop replacement bundled into a tablet that by the end of next year will take a significiant chunk of Ipad sales, and will make consumers think twice before buying a laptop. Final word from you guys?
Kamal: My final words: It will be a game changer in terms of software. It will take a small hit on Apples and all the other market shares, but it wont be a huge deal, not with only this tablet. It will not be a laptop alternative, because for this it will be to highly priced, its just too much "in between".Its too early for that.
Eric McBride: kk. Fabi?
Fabien Röhlinger: Final words: Windows 8 is a big threat for Android when it comes to the OS for PCs. The sales figures for tablets may be okay. But I believe that prices will be too high. It will depend on Android how big the impact will be. I am sure that Google is working on a couple of various things.
Eric McBride: Sounds good. Thanks guys!

What do you guys think? Will Windows 8 tablets (video) be a game changer, game "inspirer", or another flop for Microsoft?