An online survey of 2,100 American adults conducted by Sybase has come to the conclusion that almost 1 in 4 (23%) of Americans indicated that they would buy an Android-powered tablet. The graph below illustrates the desired size that the individuals surveyed would like in a tablet, with a size of 9-10" being the most popular size. 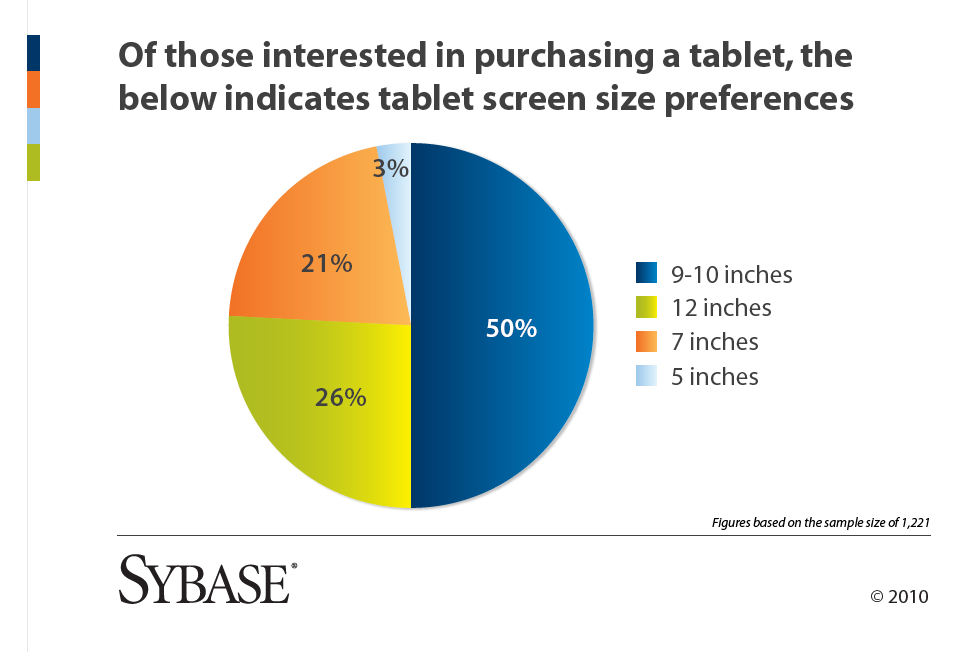 Another interesting figure from the survey is that 1 in 4 individuals surveyed indicated that the tablet they buy would act as a replacement for a laptop at work or for personal use. In addition, over half of those surveyed said that a subsidized tablet with a data contract was preferable to buying it at full price without a contract.

Sybase reports that in terms of details regarding tablet features, video chat and an onboard camera "were of limited interest, with only seven percent and four percent of respondents interested in these features, respectively."

Even more interesting is that consumers believe the sweet-spot pricing wise "would be less than $300 USD." An unsubsidized tablet at that price is not going to give consumers a good experience based on what I have seen so far. However, if the carriers step into the equation with data plans, $300 in addition to a data plan won't be a challenge.

Either way, it looks like Apple really did tap into a previously unaddressed market, or has convinced enough people that they need do need a tablet. However, this was a completely on-line survey, so the results are somewhat skewed, as not everyone uses the internet a lot, and not everyone takes part in on-line surveys.

In a strange result from the survey, about 1 out of 3 individuals said that a physical keyboard is an important feature for them in a tablet. That leaves me wondering if they understand the difference between a laptop and a tablet. I haven't seen a single tablet with a physical keyboard yet, and that is because adding a keyboard almost makes it a laptop, which kind of makes the whole reason for having a tablet (in my opinion) pointless.

TalkAndroid comments that "it’s apparent that the public wants choices, not restrictions." Androinica expresses their relief  to see that "in an iPad dominated tablet market people are still thinking about Android and that the market still has plenty of room for competition."