In mid-March we saw Motorola's rugged Push-to-Talk Android-powered  i1 announced, which was at the time, destined for Sprint. Now we are seeing that the phone is destined to hit Boost Mobile stores, Best Buy and Best Buy Mobile stores on June 20th. Possibly the most astounding part is that the phone will be offered without a contract. 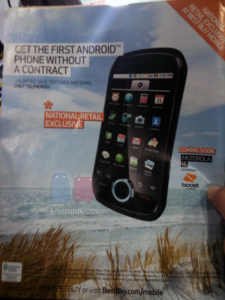 AndroidGuys writes that the phone will feature "a 3.1-inch HVGA touch screen, a 5-megapixel camera, Android 1.6, and support for WiFi, Bluetooth, and GPS."

According to Phandroid, the phone will be available for $50 per month and will come with unlimited data, text messaging, and calls. They also mention that "$349.99 has long been its rumored cost."

Here is a segment from their official press release:

“Last year Boost disrupted the wireless marketplace with the $50 Monthly Unlimited offer, and we are doing it again with the launch of the Motorola i1,” said Neil Lindsay, chief marketing officer, Boost Mobile. “Together with Motorola, we are able to offer the Android experience to those customers who enjoy the walkie-talkie feature. And with 1,100 Best Buy locations, 80 Best Buy Mobile stores and exclusive Boost Mobile stores nationwide, customers will not have to search far to find this hot handset.”

The i1 has an industry-leading 5MP camera, a vivid 3.1-inch HVGA display, and is one of the first devices to feature the new optimized Opera Mini 5 Web Browser. Combined with the Boost Mobile ‘Monthly Unlimited’ service, with unlimited nationwide talk, text and Web for $50 per month, staying connected has never been easier. The i1 also comes equipped with Wi-Fi and is one of the first Android phones to integrate new SWYPE(R) technology for quicker-than-ever messaging.

“Best Buy Mobile is excited to be the first national retailer to bring a prepaid Android smartphone to customers who are looking for greater payment flexibility when it comes to their smartphone,” said Scott Anderson, senior director at Best Buy Mobile. “One of our promises to customers is to provide the best options and choices available in the mobile marketplace. Exclusively bringing great products like the Motorola i1 to consumers helps us make good on that commitment. ”

Head on over to AndroidCentral to check out their hands-on with the device.

Apple Watch 6: teardown reveals surprises on the inside Holger Eilhard
Google Pixel 5 and 4a 5G: the final secret is out Holger Eilhard
The best apps for Android Auto in 2020 David McCourt