AdMob is well known for the reports they make regarding cellphones. They recently released two reports charting ad consumption of the iPhone, Blackberry, and iPhone and a chart showing Android's share in the number of smartphones worldwide. 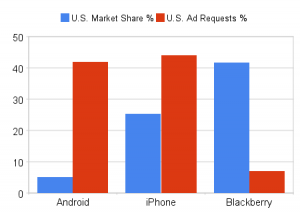 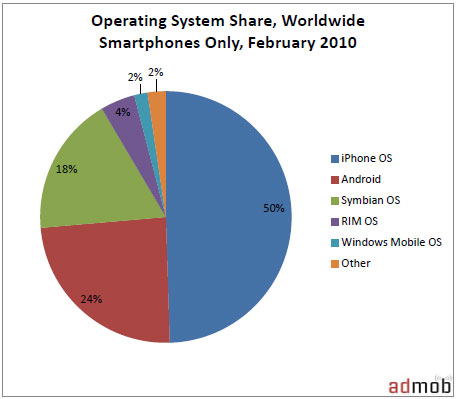 The article from AndroidGuys says this of Android: ""Android was the fastest growing operating system in the AdMob network year-over-year." Phandroid noted that Android went from having 2% of the worldwide share in February 2009 to a 24% share in February 2010, which if you can do some multiplying, comes out as a 1100% growth in share.

Phandroid goes on to note that the amount of smartphone traffic share increased. According to the AdMod report, smartphones "accounted for 48 percent of AdMob’s worldwide traffic, up from 35 percent in February 2009. The strong growth of iPhone and Android traffic, fueled by heavy application usage, was primarily responsible for increase."

A second report detailing Android's consumption of advertising recorded in AdMob network shows Android users requesting 42% of ad requests, compared to the iPhone's 44%, but when you consider that there are roughly 5 times of many iPhone making ad requests, you see Android jump way higher in terms of consumption per device.