A favourite custom ROM, about which we've so far relatively little heard, is ParanoidAndroid. You can use this to adjust and transform your Androids as desired. Even a table layout for smartphones is possible. I took a closer look at ParanoidAndroid myself. 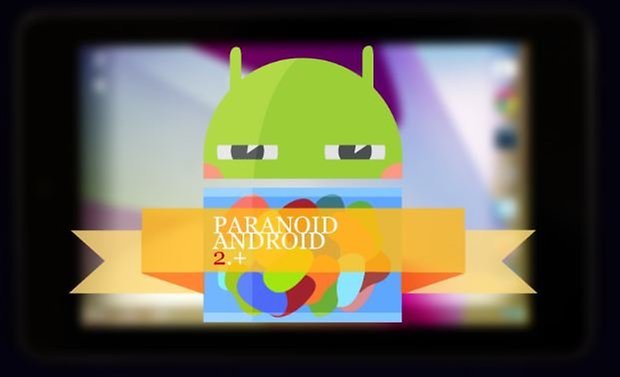 Yesterday when I presented you with Chris Sor. Whereas it felt like forever since the last time I tried this custom ROM, I quickly grabbed my Nexus 7 and installed it once again.

ParanoidAndroid gives you complete control over the Android's surface, as well as the its app display. With this, its more than simply just the tablet mode for smartphone, whose DPI count entirely changes. It's actually anything but that. The heart of custom ROMs is the powerful hybrid mode, with which you can individually tailor your display and the layout of apps, widgets and system components. This offers the advantage in that you have a lot more control over the system. For example, all apps belonging to a simple tablet mode would behave like tablet apps, which would lead to errors and crashes. The apps with ParanaoidAndroid behave normally at first, unless you configure them differently yourself.

ParanoidAndroid is actually flashed via the recovery just like any other custom ROMs. I tried this mode on my Nexus 7 and had to download the Google apps myself on top of ParanoidAndroid. Depending on your device, you might have to install a Bugfix afterwards. All information and versions for various devices can be found at XDA-developers.

Found in the Android settings, under the item ''Customization'', are all the ParanaoidAndroid settings. The most powerful configuration possibilities are hiding under the option ''Hybrid properties''. Here you can chose between four different preconfigured layouts on your start page. I had these following options to chose from with my Nexus 7: Stock UI, Phone UI, Tablet UI and Tablet UI (Mid). The last two layouts are strongly reminiscent of Android 3.x's tablet mode. 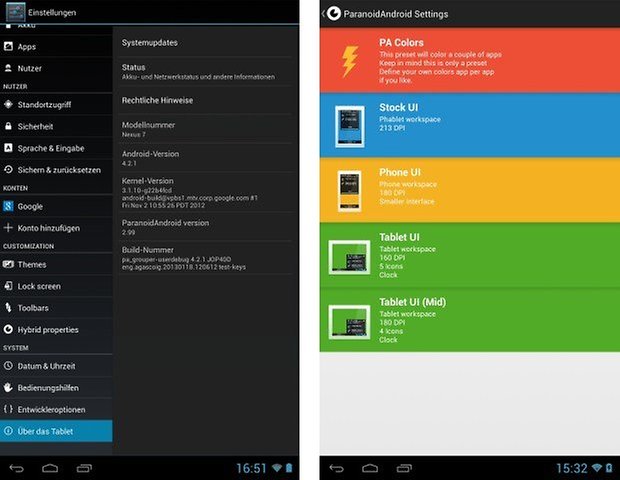 You can attain ParanoidAndrid's ''Hybrid Properties'' through Android settings.

The ''Tablet UI (Mid)'' mode worked the best on my Nexus 7. Using this, the 7-inch tablet from Google and Asus preserves the characteristics of the tablet features belonging to the Android 3.x, displaying however slightly larger buttons and font in contrast to the regular tablet UI. This insures that everything can be easily read on even smaller tablets and smartphones too. In addition, the touch elements using your finger are also easily controlled. 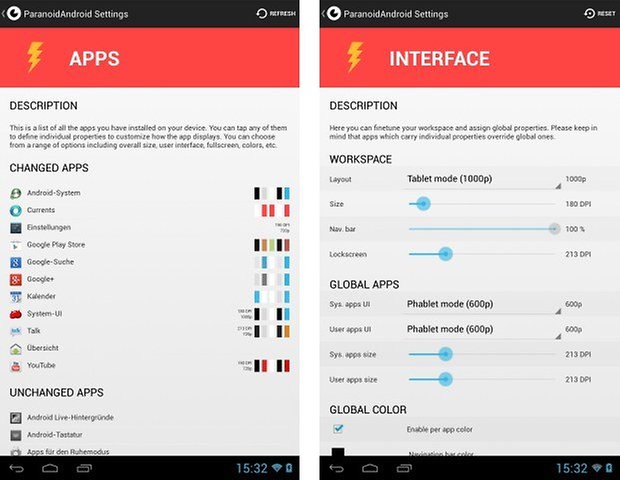 What counts most in terms of settings is trail and error, not studying.

A swipe from left to right brings you to further settings. Using ''Interface'', you can customize the workspace to your liking and for example, change the size of the navigation bar or set point density. This has a big effect on the display. Furthermore, here you can also enable the ''Per-App-Colour''. The navigation and status bar would then be displayed in a different color per app, which would then better suite the opened app. Reminiscent of iOS 6 by Appel, this is above all a nice thing to play around with and also looks pretty damn cool. ParanoidAndroid readily offers preset colors for certain apps, which of course you can set up using individual colours per app.

For the fun of it, I gave the navigation bar for Google Chrome a grey background and colored the buttons dark. 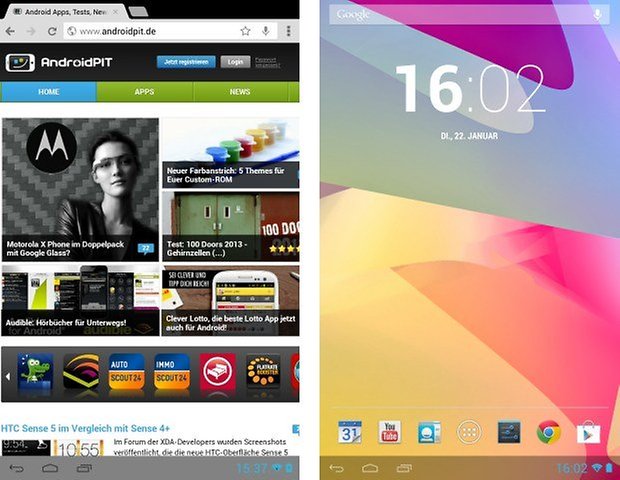 Individual color and transparency settings in Google Chrome and on the home screen.

If you would like to activate individual colors, you simply go to the start page of ''Hybrid Settings'' and first press on ''PA Colors'', then on ''Apply'' found in the top right corner. In order to adjust the color for a particular app, you need to go back to the settings start page and then swipe from left to right. First chose ''Apps' from the side menu and then the desired app. Under the ''Colors'' tab, which can be reached after many swipes from right to left, you can find the concealed color settings. Here you can experiment depending on whatever tickles is your fancy. Once you've pushed on ''Apply'', all the settings will be carried over. If you happen to not like the results, the reset button insures that all will be undone and forgotten. 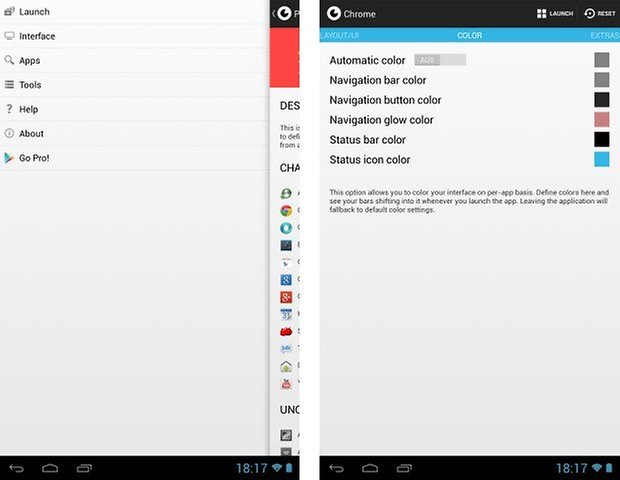 In settings, you can chose varying color per app, amoung other things.

But for all that, this mode caused problems while I was testing it out: every now and then, the navigation bar didn't carry over the changed colors. This was aided by starting up my Nexus 7 again or by re-activating the tablet layout.

Of course, these are not all the settings that the ParanoidAndroid has to offer. Since the custom ROM was first based on CyanogenMod and since then, the 4.2. version on AOSP, there are yet a lot of further known options. For example, there is the theme chooser, which allows you to change the appearance of your Android with the help of themes.

In the case of baptised settings of ''Lock Screen''you can change the appearance and behaviours of your screen-saver. Another example is that you can start an app and control the playing music with the volume buttons or even make your screen-saver transparent. This way the last opened app will be visible under it.

Those who find the established quick settings pertaining to Android 4.2 too rigid will be pleased about the new ''Toolbar' options, because here you can select the indicated tiles and customize the layout. In addition, you will find yet another hidden practical options: the so-called ''Pie Controls''. When this is activated and you enable the '' Expanding Desktop'' mode after having pressed on the on/off switch for a while, the full details of the bar will fade out and you'll find yourself in some sort of full picture mode. The pie controls will be displayed by means of swiping (standard is to swipe upwards from under the screen's edge) and will look like a pie diagram, hence the name. 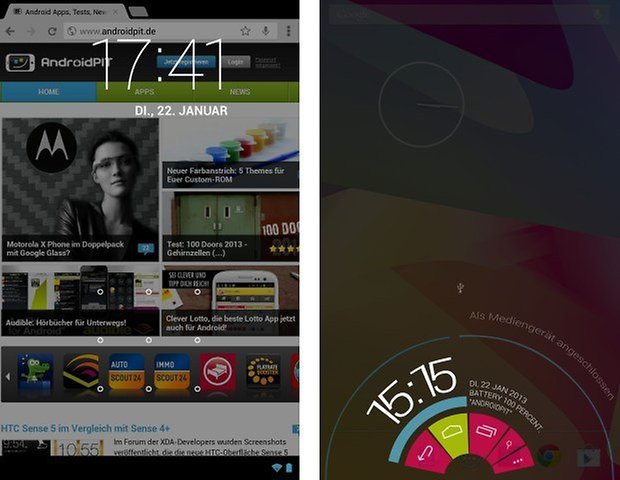 The controls will also be shown beside the time and battery status, under which you will see Android 4's familiar buttons like back, home and open apps. This allows for the biggest screen surface possible, without having to forego any navigation controls.

It was good to have tried out ParanoidAndroid again! The custom ROM offers a plethora of options and personalized settings. However it's also at the moment not to everyone's taste, since the beginner's learning curve is bigger than other ROMs. It simply takes time until you've tried all the options and above all, the ''Hybrid properties'' and internalized them. 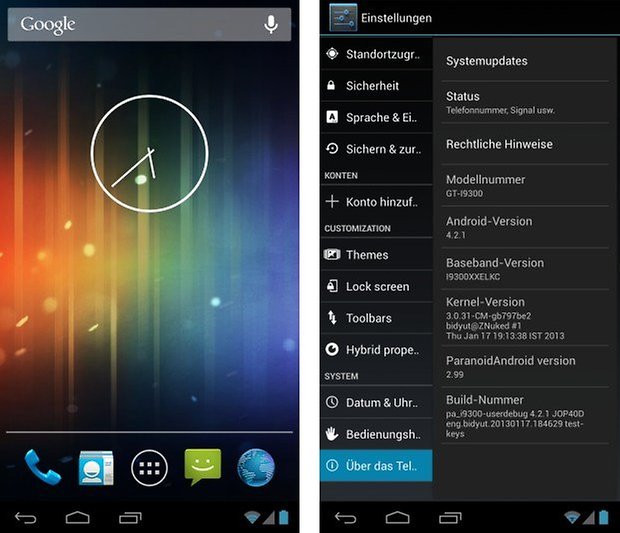 This is how ParanoidAndroid looks when set up in ''Tablet UI'' mode on a Galaxy S3.

For those Tinkerers, for whom CyanogenMod offers too little possibilities and settings, and for all who want more control over their system, ParanoidAndroid is definitely worth a look. To begin with, I'm going to leave it installed on my Nexus 7, so that I can actively observe further progress.