Well it's about time! After having already tried out ParanoidAndroid and MIUI on my Nexus 7, I am now going to dedicate myself entirely to another very popular custom ROM: AOKP offers an abundance of personalizing options and setting possibilities. For this reason, it is particularly suited for tinkerers with a zest for experimentation. 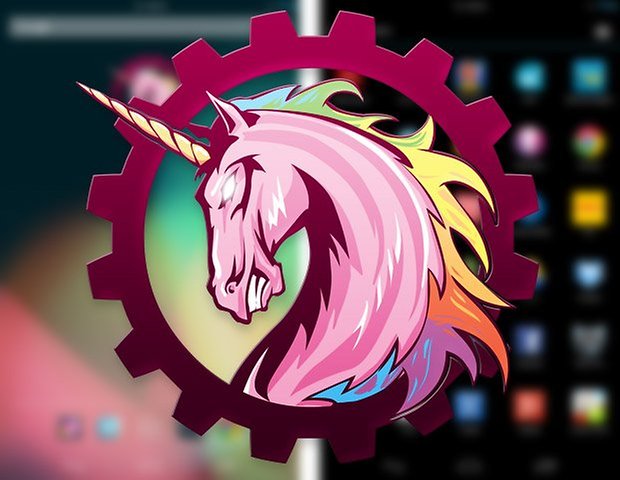 At a first glance, AOKP hardly differs from Vanilla Android. The navigation and status bar have a transparent background, but otherwise, this ROM is virtually identical to the Android version, which is installed on Google's Nexus devices for example.

All the same, open up the Android settings and take a look at the AOKP options. It's quickly clear that there are more switches and adjustments here than found in many other custom ROMs! This may seem quite daunting at first, but the setting are clearly organized in various categories. This allows for someone to quite quickly find their bearings, after only needing to get used to it for a short while. 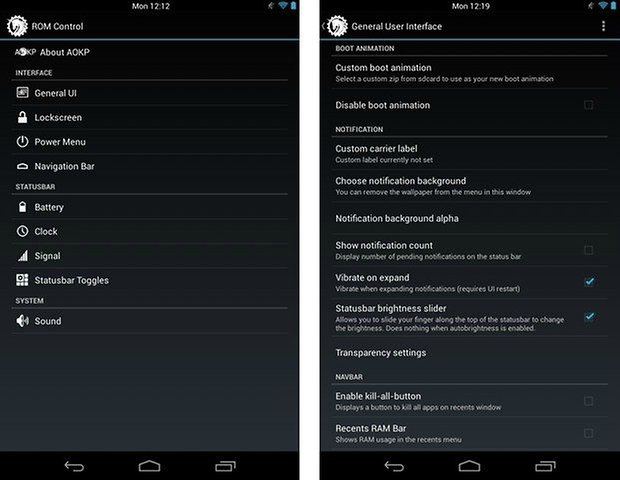 Every tinkerer's wet dream: so many settings!

The enumerated details for every setting won't be bursting out the lines of this article, as I'd probably still be sitting here tomorrow describing every configuration possibility. Suffice it to say that whatever you want to change, AOKP will have the appropriate option! 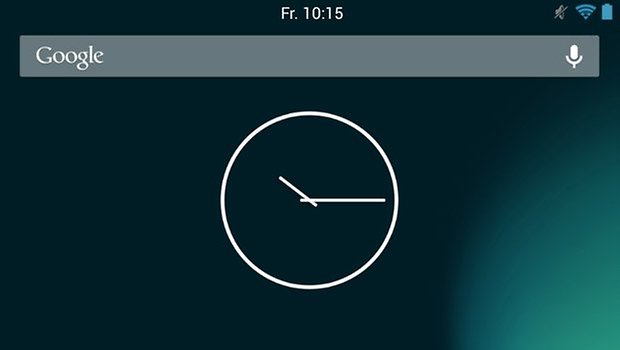 I placed the digital clock above in the middle of the status bar. I like it!

Do you not like the clock display for example? With AOKP, you can change more than just the colour and the position by going through the menu and choosing Settings ->ROM Control ->Status bar-> Clock. Weekday display options, as well as actions for when you touch the clock are also at your disposition. For example, I configured my clock so that it is placed in the middle of my status line and made it white. Briefly pressing on the clock will then bring you directly to the clock app. 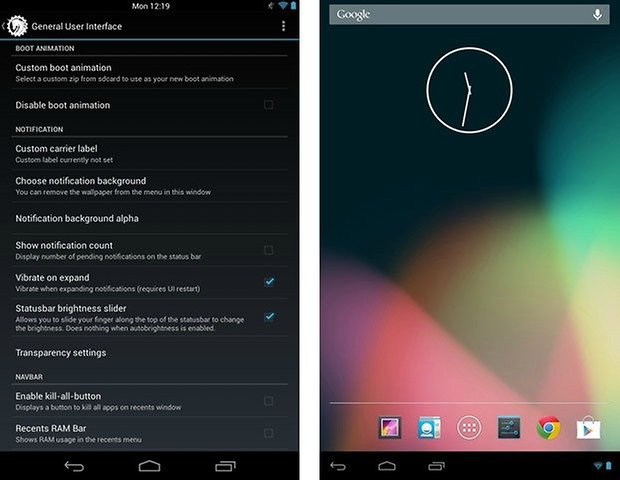 The status and navigation bars are combined in the Tablet UI.

Needless to say, this is only one example among many. AOKP can do so much more. Comparable to the ParanoidAndroid, this Custom ROM will also allow you to shift the UI mode. You can choose from ''Phone'', ''Tablet'' and ''Phablet''. The standard phablet option is activated on the Nexus 7, but the ''correct'' tablet mode can be set up without any problems. You'll find the settings for this by going through ROM Control->General User Interface->UI Mode. 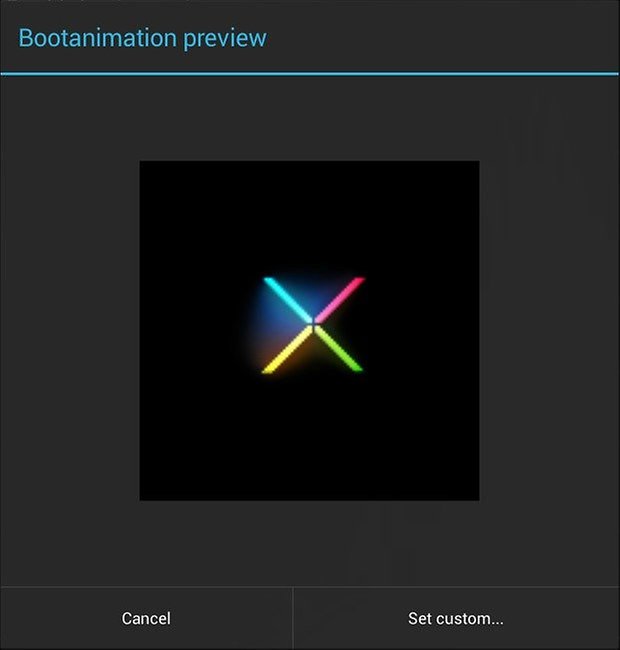 All the different animations are shown in a preview.

Also a cool detail: you can also change your smartphone's or tablet's boot animation as desired. AOKP shows an adequate preview for each existing animation. If you don't approve at all of the boot-screen, you can get rid of the animation completely. But that being said, you don't actually have to see it that often. 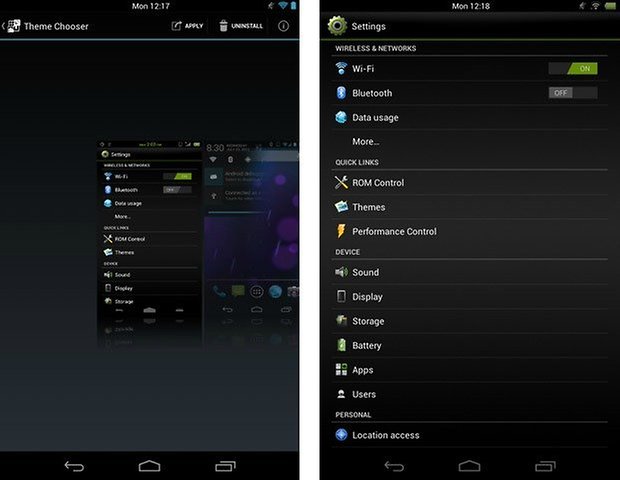 And of course, you can't forget to mention the built-in theme engine!

Just like CyanogenMod, AOKP also supports themes. Because of this, you can almost completely change the appearance of your Android. If you want the HTC Sense look on your Nexus smartphone for example, you're barking up the right street. You can find the themes either in the Play Store or on the XDA-developers website. By clicking here, you can read about five different themes that I've already presented. 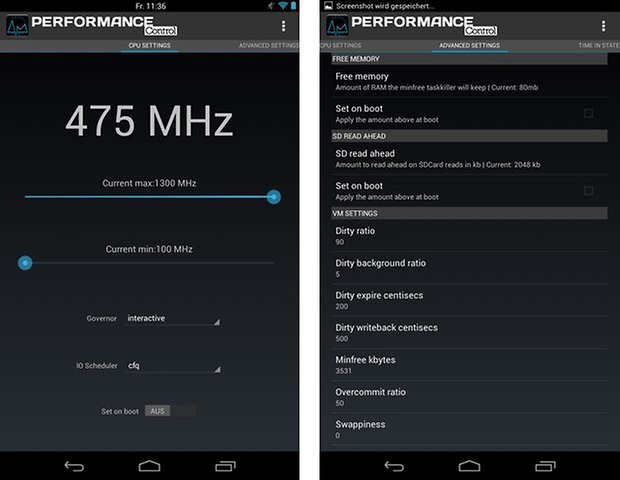 The ''Performance Controls'' are very impressive. If you aren't careful, you could cause damage to your device.

And that's not all. On top of the settings, which are only really of the cosmetic nature, you can find impressive options under the ''Performance Control'' tab. Using these, you can change the clock speed of the processor and the VM settings, among other things. A word of caution: if you don't know your way around settings, it would be better to keep your hands off of it, in order to avoid any damage to your device. 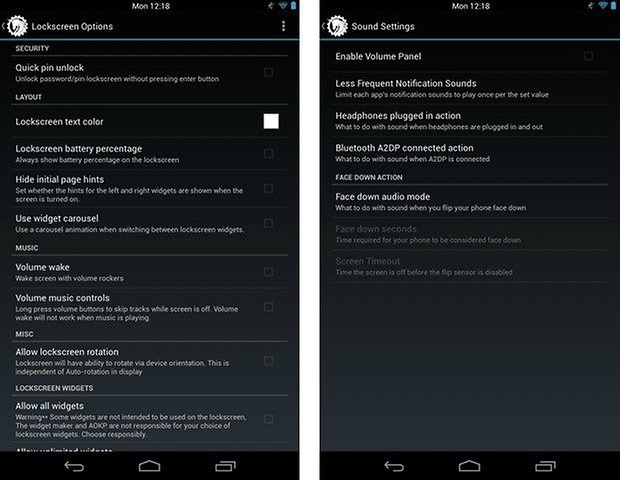 AOKP still has so many different settings to offer!

AOKP is exactly the right custom ROM for tinkerers like me. I really love customizing every single little individual detail and AOKP offers me exactly this opportunity. My Nexus 7 works smoothly as usual, without any hiccups or long loading times. That being said, it's certain that AOKP isn't everyone's cup of tea with its wealth of options. Those who would prefer a plainer version should stick to another ROM, like CyanogenMod for example. But for the rest, I can nevertheless recommend AOKP wholeheartedly.