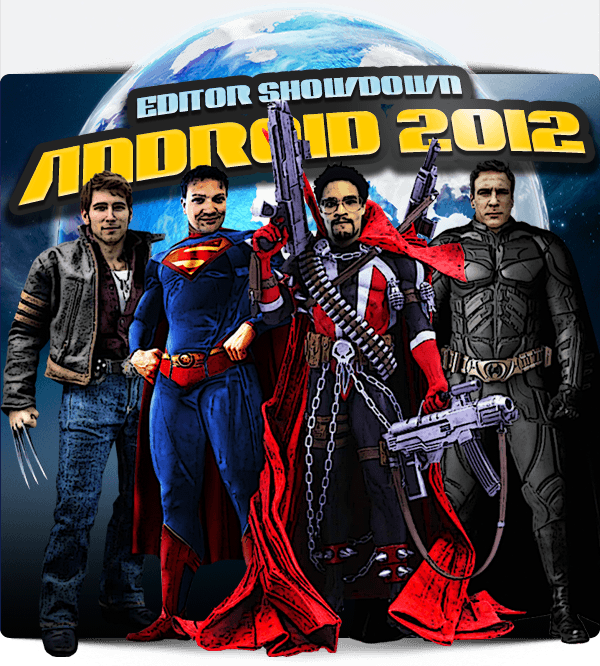 (Picture: What happens when tech. Geeks remember they have a graphics guy on retainer)

Some of the editors here at AndroidPIT were sitting in our break room the other day and we got to talking about the coming year and what 2012 would bring to the Android community. As so often happens when, tech geeks get together, out friendly conversation quickly became a heated argument and soon enough each of us had slipped into our inner geek persona and a bet was quickly hatched. Each of us picked 5 events, we are sure will happen in 2012 and, whoever gets the most right wins an all-expenses-paid trip at a 4 start hotel at the end of the year, courtesy of our boss.

Just to keep us honest, we decided to make the bet public. So here they are, Fabi, Kamal, Fran and my predictions for 2012. Who do you think is going to come out on top?

If you read regularly, you might have seen my report on the state of Google TV. While it may have floundered a bit since it's launch in 2010, Google TV is set to take over the television industry. Improved technology coupled with changing media tastes –o ver 70% of all TV programs and now “on-demand” recordings– mean that Google is in the perfect position to take hold of the budding “smart tv” industry.

2. NFC will have a hard time gaining acceptance

Of course NFC technology is cool but I don't think it's going to find its audience in 2012. We are in an economic downturn at the moment so I don't think people are exactly clamoring for a new way to spend money. What's more, you are most likely only going to find NFC chips in higher end devices meaning, which is also going to limit it's spread. I think NFC is great tech, but we're going to have to wait for 2013 before it really takes off.

3. The developing world will over take the West as the prime destination for Android tech.
We've already seen this start to happen in 2011. China is, next to the US, the most important country, when it comes to Android devices sold. The Android community's mix of good hardware and cheap prices on the lower end market makes Android a natural fit for countries/ communities, who need the advantages of modern technology but can't afford top of the line models.

4. We will see a Nexus device from Motorola.
Google-rola. Need I say more?

3. Android will make an appearance on other devices
One of the major growth factors for Android in the next year will be its expansion to other devices including TVs, watches, sports devices, etc. Leading the charge will be Google's renewed focus on Google TV.

4.Android fragmentation will decrease
Android Ice Cream Sandwich and its Holo UI will help pull Android out of its design slump. The same is true for the development community who will be able to reach the same level of consistent quality that you find in other ecosystems.

5. Google's Ads will be better targeted
Google will be able to better combine its cloud services and this will lead to better, more efficient ad placement with ads better targeted at particular users.

Yes, I know, NFC has been in existence since 2011 and already more than 35 million devices have been sold with this technology on-board. But I expect that number to double over next year. As Google Wallet gains traction and Visa hops on board (there have already been reports of Visa certifying an NFC app), the technology will become the standard method for payment across the globe.

If 2011 was a great year for Android, 2012 will be even better. Fabi, Kamal and I think Android will post record numbers in 2012. Without a doubt, more Android devices will be activated and new equipment manufacturers will opt for Google's mobile operating system.

3. Flexible Screens Will Be Released

In 2011, we were introduced to the idea of the flexible smartphone. This lead to a rumor that such a device will come on to the market in 2012. Another unique concept, called Kinetic, surfaced in connection with Nokia. I think 2012 will be the year of the first official smartphone with a flexible display.

4. Smartphones with Pico Projectors Will Hit the Market

Samsung introduced the first pico projector in early 2009. Thanks to ever-improving technology, I predict that several phones will be released that can project images on to surfaces – and be viewed in broad daylight.

5. Smart Homes, in Which All Major Appliances Are Controlled by Android, Will Go Into Production

At CES, Samsung has already shown how household appliances can be integrated with the Android OS. Other manufacturers will doubtless follow this trend. The devices will be controllable from your smartphone, making wireless activation of refrigerators, dishwashers, televisions and lights super easy. What sounds pretty futuristic will become standard. 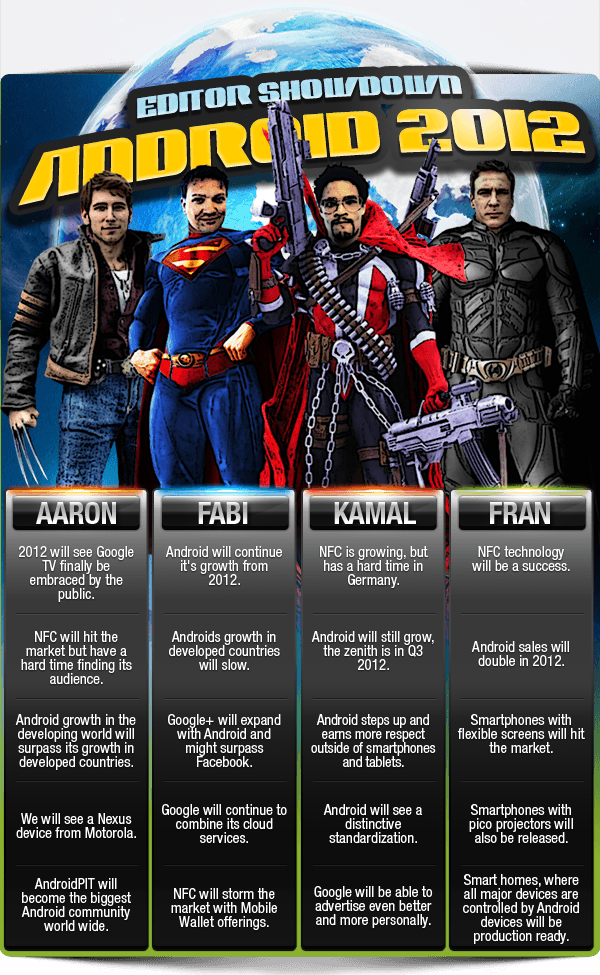 You probably noticed, that we didn't go into detail about Fabi's prediction. Don't worry! We're going to give him just as much air time as we've had! His detailed predictions will feature on AndroidPIT in the coming days so make sure to come back for some of the most detailed predictions you can find from a guy, who really knows the industry.