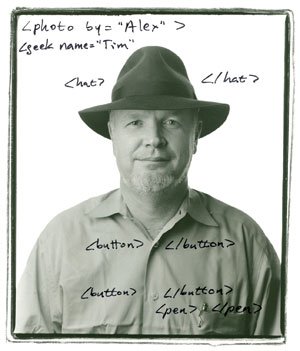 Tim Bray--co-inventor of XML, notable tech blogger, and until recently a Sun Microsystems employee--has joined Google's Android team in part to show the world what he thinks is wrong with Apple's iPhone.

The move puts a personal face on the cultural, technical, and business issues central to Silicon Valley companies. In a blog post titled "Now A No-Evil Zone," Bray said Monday he's in philosophical alignment with Google in general and in opposition to Apple's iPhone specifically

"The reason I'm here is mostly Android. Which seems to me about as unambiguously a good thing as the tangled wrinkly human texture of the Net can sustain just now," Bray said.

Specifically, he likes Android's developer-friendliness, its full suite of interfaces, its open-source nature, its strong Google backing, its open market--and its competition to the iPhone. Bray offers the following tirade against Apple's ways:

The iPhone vision of the mobile Internet's future omits controversy, sex, and freedom, but includes strict limits on who can know what and who can say what. It's a sterile Disney-fied walled garden surrounded by sharp-toothed lawyers. The people who create the apps serve at the landlord's pleasure and fear his anger.

I hate it even though the iPhone hardware and software are great, because freedom's not just another word for anything, nor is it an optional ingredient...

The big thing about the Web isn't the technology, it's that it's the first-ever platform without a vendor (credit for first pointing this out goes to David Winer). From that follows almost everything that matters, and it matters a lot now, to a huge number of people. It's the only kind of platform I want to help build.

Apple apparently thinks you can have the benefits of the Internet while at the same time controlling what programs can be run and what parts of the stack can be accessed and what developers can say to each other.

I think they're wrong and see this job as a chance to help prove it.

Google in some areas is allied with Apple, but with Android increasingly is in competition. Google Chief Executive Eric Schmidt resigned from Apple's board in 2009. And in March, Apple sued HTC for patent infringement, a move that has repercussions for Google since HTC builds its Nexus One and other Android phones.

Google famously adopted a "don't be evil" motto, attempting to build into its corporate culture a motivation besides merely maximizing shareholder value. Although this appeals to Bray, he said he recognized the time for absolutes is over for Google.

It's now too big to be purely good or in fact purely anything. I'm sure that tendrils of stupidity and evil are even now finding interstitial breeding grounds whence they will emerge to cause grief. And there are some Google initiatives that I feel no urge to go near.

But there are those Ten Things and you know, I'm down with 'em. Unreservedly.

Bray had been at Sun Microsystems since 2004; Sun had a strong corporate culture endorsing open interfaces and, eventually, open-source software as well.

But Sun of course didn't remain independent. decided against staying with the company as it becomes part of Oracle.

"I'd had an offer to stay with Oracle which I decided to decline," Bray said. "I'll maybe tell the story when I can think about it without getting that weird spiking-blood-pressure sensation in my eyeballs."

How to listen to YouTube with the screen off Nicholas Montegriffo
Google Duo & Messages: are some Honor and Huawei phones getting locked out? Holger Eilhard
Honor View 40 announced, ex-Huawei sub-brand announces partnerships with Intel, Qualcomm Rahul Srinivas