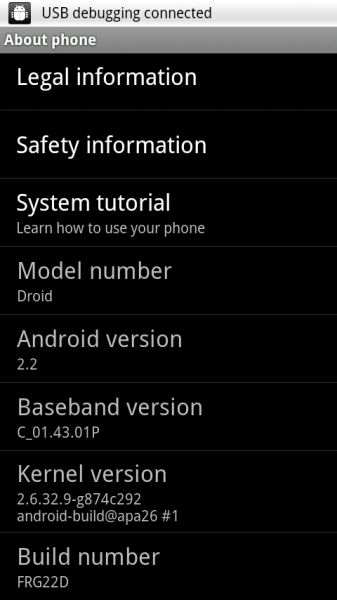 Engadget reminds us that "Verizon and Motorola's first go-around at pushing Android 2.2 to the original Droid didn't include compatibility with the Flash 10.1 install in the Market" but they seem to have finally made good on that promise.

Below is Verizon's official statement about the update, according to Engadget:

Verizon Wireless has begun pushing an update today to the DROID by Motorola (introduced November 2009) that will allow customers to download Adobe Flash 10.1 via Android Market. Flash Player 10.1 provides access to millions of sites with rich content including animations, casual games, videos, rich internet applications, audio and much more.

Can't wait for the update to get pushed out to you? Phandroid put together a walk-through on how to install the update manually:

Start off by downloading the update.zip file from this mirror or the update file directly from Google’s servers. Remember to make sure the file is named update.zip (and especially make sure it isn’t update.zip.ZIP).

1. Turn off your phone.
2. Restart it in recovery mode by holding ‘X’ on the keyboard while powering up.
3. When a triangle with an exclamation point appears, release ‘X’.
4. Press the volume up button and camera button simultaneously.
5. Select “apply update.zip” from the menu with the d-pad. Enter your selection by pressing the d-pad button.
6. The update will be applied. Select reboot phone after it is finished.

Droid-Life comments that after installing the update, "Flash was there for us immediately!" You can also hit up AndroidForums for a more indepth walk-through.

If you decide to do it, let us know in the comments or forums how it works!