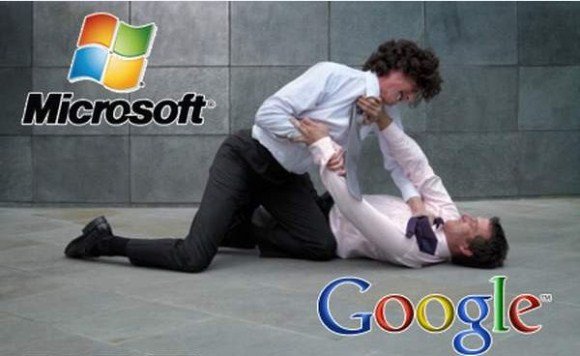 So, yesterday, David Drummond, Google's SVP and chief legal officer, wrote on the corporate blog about how he'd "had enough" of bogus patent claims leveled against the the company. "Instead of competing by building new features or devices, [these companies] are fighting through legislation," wrote David Drummond. He characterized the suits as "a hostile, organized campaign against Android by Microsoft, Oracle, Apple and other companies, waged through bogus patents.

(Crib note: in a defensive strategy, Google tried to bid almost a billion dollars on Nortel patents to defend against future legislation. But the company was outbid by a consortium including Apple, Microsoft and RIM, who bid a combined $4.5 billion).

Fast foward to yesterday afternoon– one of Microsoft's lawyers, Brad Smith, responded on Twitter, saying that Google could have teamed up with Microsoft at the patent auction and bid on the Nortel patents together but refused. "We asked them to bid jointly with us. They said no," Smith Tweeted.

But Google wasn't buying it. Drummond responded yet again on the Google Blog with the following post:

It's not surprising that Microsoft would want to divert attention by pushing a false "gotcha!" while failing to address the substance of the issues we raised. If you think about it, it's obvious why we turned down Microsoft’s offer. Microsoft's objective has been to keep from Google and Android device-makers any patents that might be used to defend against their attacks. A joint acquisition of the Novell patents that gave all parties a license would have eliminated any protection these patents could offer to Android against attacks from Microsoft and its bidding partners. Making sure that we would be unable to assert these patents to defend Android — and having us pay for the privilege — must have seemed like an ingenious strategy to them. We didn't fall for it.

Ultimately, the U.S. Department of Justice intervened, forcing Microsoft to sell the patents it bought and demanding that the winning group (Microsoft, Oracle, Apple, EMC) give a license to the open-source community, changes the DoJ said were “necessary to protect competition and innovation in the open source software community.” This only reaffirms our point: Our competitors are waging a patent war on Android and working together to keep us from getting patents that would help balance the scales.

And now Microsoft's lawyer has responded again on Twitter:

Hello again David Drummond. This is going to take a few tweets, so here we go. Let’s look at what Google does not dispute in their reply.

We offered Google the opportunity to bid with us to buy the Novell patents; they said no.

Why? BECAUSE they wanted to buy something that they could use to assert against someone else.

Google Microsoft
Never miss a story with NextPit via  Telegram 📲!