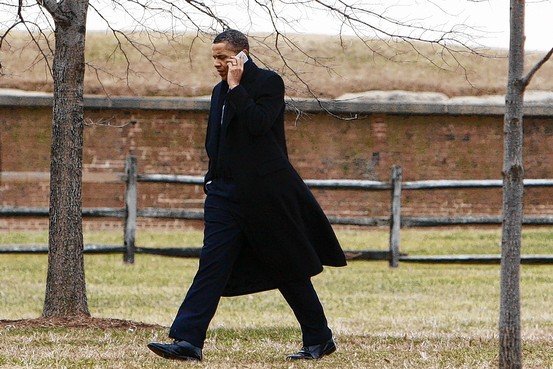 (Is the President holding an iPhone, Android or Blackberry?)

Just as things are Android-Apple legal mess and prevent it from crippling the entire industry.

Why have patents suddenly become such a big issue these days?

The answer is simple: the average 4G smartphone includes around half-million patents – something even legal experts have a hard time wrapping their heads around. Apple. Google, Microsoft, RIM, Motorola, HTC, Samsung, Kodak, Oracle, Foxconn – the list of companies involved in the patent battle is constantly increasing. Yet this battle isn't a free-for-all because Apple has adopted a different strategy from the rest. Most companies – Google included – settle on cross-licensing deals which allow each respective company to use the other's patents on a free and equal footing. In simple terms, companies agree to exchange patents in an exclusive deal to prevent a drawn-out legal fight.

Apple is in a league of its own

Apple is different than everyone else. They are not interested in licensing revenue and they aren't willing to share patents with other companies. By defining themselves as the innovative and creative company, Apple isn't willing to take any pointers from anyone else. Apple has worked hard to create the Apple ecosystem with iPhones, iPads and iPods – and it is extremely protective of its work.

So in a surprising move, Verizon has taken the bold measure of contacting the President himself. Randal Milch, the head of Verizon's legal team, has allegedly warned the President that this patent war could bring the entire smartphone industry to its knees. In the context of a failing American economy and increasing unemployment, Verizon hopes that Obama will not let the mobile sector (one of the only industries that is showing amazing growth and job creation during the global recession) go under in the whirlpool of a legal standoff.

So what can President Obama do to save Android?

Patent disputes of this gravity are handled by the International Trade Commission – an American independent government agency in charge of dealing with copyright infringements and unfair trade practices. Although the Commission cannot impose fines on companies, the agency does have one major weapon under its sleeve: it can ban the import of devices into the United States. Should the ITC rule in favor of Apple (as is currently in the case in Holland and Germany), Verizon would lose its whole Android lineup – which are currently their most profitable smartphones. And here's where Obama comes in. The President can single-handedly overrule any ITC ruling with a blanket decision in favor of competition and Android phones. Obama's executive order could put an end to all the fighting and prevent the worst case scenario from becoming reality for Android device makers.

It is still unclear, however, what Obama's response to the Verizon request has been.

More information regarding the smartphone patent fight can be found here.