So it's over. The Samsung Galaxy Note 7 will no longer be sold anywhere. Customers who still have the device can return it to the dealer. We've already covered the #note7recall topic in many articles so here, I will just discuss the extent to which Samsung has acted correctly in recalling the Note 7.

After receiving the first 35 confirmed reports of burning Note 7 batteries, Samsung launched the recall on 2 September. If the tone of the first report was quite mild and seemed to be more of a 'voluntary exchange,' it became much less so eight days later.

"Samsung calls on Note 7 owners to immediately participate in the exchange".

This is what the report on 10 September stated. Replacement units were widely available at the time – a miracle that it had happened so quickly. Shortly after customers went back to their dealers to exchange their Note 7 devices, the next stroke of bad news hit: the replacement devices were also bursting into flames.

Late on 10 October, the following official statement was published (from Samsung's website):

"We are working with relevant regulatory bodies to investigate the recently reported cases involving the Galaxy Note7. Because consumers’ safety remains our top priority, Samsung will ask all carrier and retail partners globally to stop sales and exchanges of the Galaxy Note7 while the investigation is taking place.

We remain committed to working diligently with appropriate regulatory authorities to take all necessary steps to resolve the situation. Consumers with either an original Galaxy Note7 or replacement Galaxy Note7 device should power down and stop using the device and take advantage of the remedies available".

We have been told that the Note 7 is permanently discontinued and will not be sold anymore.

We shouldn't blame Samsung for the batteries

Consumer requirements are clear: we want lithium-Ion batteries that are able to charge faster. We also want to be able to store more power, all without the battery being any heavier. But this is turning the batteries into small bombs. If it weighed seven kilograms, it would have the same amount of energy as one kilogram of TNT. If it had a short circuit, it wouldn't explode, but ignite and burn unstoppably. This is exactly what was seen with some of the first generation batteries and also with batteries in the Note 7 replacement devices (according to The Verge, this was due to a faulty component, which was supposed to separate the anode and cathode), and the correct response from Samsung was to completely cease delivery of the devices.

How could this have happened twice?

The fact that we are allowed to take lithium-ions onto airplanes at all is due to standardized, large-scale safety tests. The problem is that these tests can only be performed on random samples. This means that out of 10 000 batteries, only a handful are tested with the assumption that the other nearly 10 000 batteries would behave similarly in the test.

Statistically, this is sufficient. But if a change occurs in the production process (the supplier changes a single component or if one of the testers incorrectly interprets a result, misinterprets it or deliberately falsifies it), tens of thousands of batteries are send out that may not withstand conditions outside the factory halls.

The fact that this occurred both in the original and replacement Note 7 devices is disappointing but is not entirely surprising. As described above, there are many potential causes of the fault. Considering the time pressure Samsung was under, it was rather remarkable how quickly they obtained replacements for the 2.5 million units sold. In the zeal of battle, someone in the production or quality assurance chain might not have known the exact problem, so the mistake of the first production run was able to continue in the second run.

And Samsung does not have a lot of options when their market demands batteries in those quantities. The production of lithium-ion batteries for the world is so tight that it was doubled by the construction of the Tesla Motors' Gigafactory alone!

Reuters news agency reported that, according to credit reports by Credit Suisse, the problems with the Note 7 amount to revenue losses of nearly $17 billion. On top of that will be over $1.5 billion for waste disposal costs for the 4 million Note 7 devices that were built. We can't yet speculate about indirect effects, such as potentially low sales of the Galaxy S8.

Since Samsung has cash reserves of over $68 billion, they should be able to recover from the short-term damage. However, problems of this magnitude should not happen too frequently. Even if Samsung sees great sales in Korea with its hotels, oil tankers or life insurance, those areas also each have their own risks.

Statista numbers show that the conglomerate is expecting to reach an all-time record. So it looks like we don't have to worry about Samsung itself. 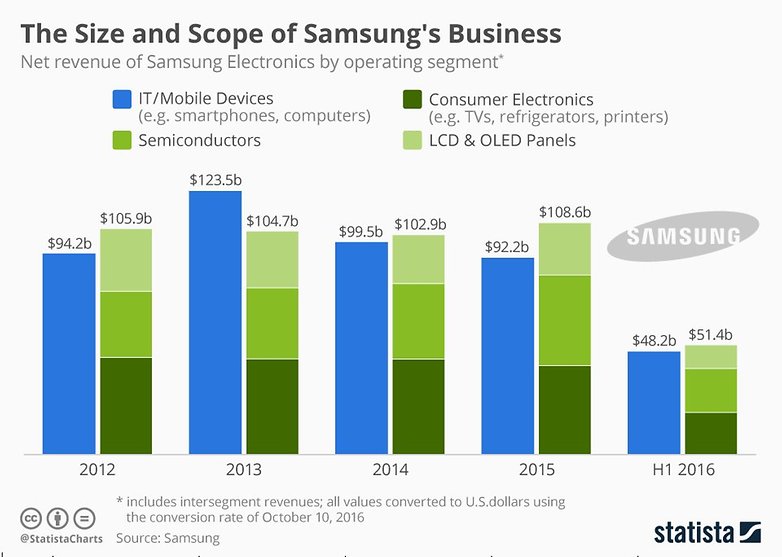 You can find more statistics at Statista.

This was the right decision

Samsung did its best but unfortunately, it was not good enough. A second recall would certainly be feasible but would customers trust a future 'Note 7' product if the name is associated with soot? Samsung is known for a number of good products and fair service, even if the prices of the devices are high. They should not jeopardize that.

If the troubles of the Note 7 were to be dragged out, the shadow of the dispute would soon spill over onto their other products. This is hardly desirable from a marketing perspective. After all, in February, the Galaxy S8 will be released as the next top smartphone, which Samsung will need in order to revive sales.

Until then, the company should just let the dust settle on the Note 7 story.

What we want to know now

Samsung is now talking about looking into the cause of this situation. Even before the release of the Galaxy S8, customers will want to know exactly why the Note 7 burst into flames. It is clear that the battery technology used was dangerous. What is still unclear, however, is why other devices remained without these abnormalities.

So who is to blame for the problem? And what will be done to prevent this problem from happening in the future? Samsung must answer this question clearly, so that the public can be sure that the Note 7 remains an exceptional case.

Apple headset with rOS allegedly ready for 2022 launch
Here they are: Our top 5 Android and iOS apps of the week
iPhones are deactivating FaceTime and iMessage due to a mysterious eSIM bug

iPhone 14, Airpods Pro 2, and the new Apple Watch announced this September 13?
How to control your Apple Watch without touching the screen
OnePlus Nord Buds hands-on: Unbeatable at first glance