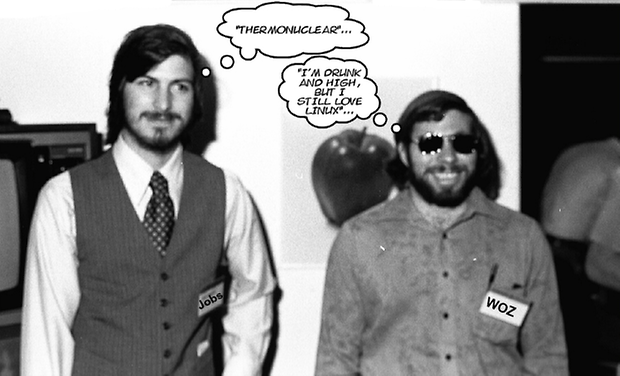 Before I get started, I just want to state that Apple co-founder Steve Woz is not only a genius, but an unbelievably down to earth, open minded, and realistic type of guy. He speaks his mind, doesn’t pick and choose, promotes transparency, and has no problem praising a good product regardless of if it comes from a competitor or from Apple. So what reality bombshell did Woz drop on us this time? How about the fact that he doesn’t understand why it was ok to release iTunes for Windows (a competitor), but not for Android? But there’s more...(and yeah, that really is Steve Jobs and Steve Wozniak in the photo. I simply couldn't resist editing it a bit).

But let’s start there. That’s a damn fair question right? Microsoft is still a HUGE competitor for Apple, and regardless of how many iMacs or Macbooks Apple sells, they pale in comparison to the amount of consumers that run and buy Windows based computers. So it was a pretty smart move to release iTunes for Windows right? I mean it doesn’t take a rocket scientist to see that by reaching out to the majority of PC consumers (which are Windows users), that you’ll obviously make ALOT more cash flow by allowing them to buy music through iTunes right? Well then, what about the 68% of the world that uses Android devices?

Not only does this strategy keep Apple from raking in literally millions (if not more) more dollars by not providing an iTunes app for Android, but it also demonstrate 2 things: That the company lacks common sense, and that their obviously dumb enough to sacrifice pride for profit. It also would have put Apple in a better strategic position against Google, as releasing an iTunes Android app would definetely have turned more Android users towards iTunes and away from Google Music (who knows if Google would have created Google Music had iTunes been available to Android users from the get go?) I feel you on this one Woz, and it’s awesome to know that not every Apple employee has totally gone bananas. Remember, this is Steve Woz here, the CO-FOUNDER of Apple. If he makes this statement, it must have some merit.

But don’t take my word for it. Here’s the direct word for word quote from The Woz via the “Ask Steve Wozniak Anything” session that took place a few days ago on apple.slashdot.org :

“Apple's real rise from the small market-share Macintosh company to the iProducts of today began with iTunes and the iPod. This turned out to be a 2nd huge business which roughly doubled Apple's 'size'. If you remember, we ported iTunes to Windows. We now addressed 100% of the world's market with this integrated system (iPod/iTunes) and it began the era of Apple that we are now in. So why don't we port iTunes to Android? Did something get closed up? I love Apple products and iTunes and wish it were on my Android products too”.

So it seems that The Woz realizes himself that Apple’s closed system kept an iTunes for Android from happening. But how does he feel about closed systems? Here’s a shocker for ya:

BAZINGA. That’s right folks. Steve Wozniak stated that jailbreakers remind him of himself and the late Steve Jobs in their younger days, and that “so much of me lies in the Linux and open source thinking. It’s where I’d be if I were young and finding my technology way”.

What about patents? How does he feel about the patent wars that Apple clearly refuses to ease off of? Again, another quote:

"I wish that instead of all these lawsuits Apple was sitting down and cross-licensing with the other players," he said. "They have come up some very good features without complicating the UI. Things like a palm swipe to take a screen snapshot. I would like my iPhone to be the best it could, even if someone else did some of the things first."

Do I really need to say anything more?

If you want to read the entire session with Steve, you can check it out here. It’s a pretty interesting read. I’m not saying that he doesn’t support Apple, as he makes it clear that he views them as number 1. But his mentality certainly is a breath of fresh air, and seems a lot more open minded than “I’m willing to go thermonuclear on this”, or the opinion of an Apple VP that stopped using Instagram due to Android getting it.

Original picture of Steve and Steve from raynoreport.com (edited like a mofo by myself)