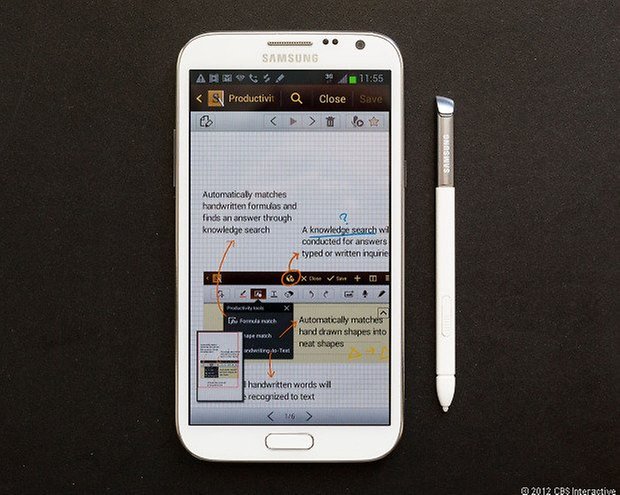 At Samsung's Galaxy Note 2 press event, the company unveiled a dizzying number of new features – most of them involving the Note 2's BFF, the S-Pen. It's rare that we've ever seen a product packed with so many great new ideas. If you were overwhelmed by all the innovations, or wanted to know about them in greater detail, you're in luck: here are the top 10 tips and tricks to get the most out of the Galaxy Note 2:

Samsung premiered an innovative way of cutting and pasting images in the original Galaxy Note. In the Galaxy Note 2, you can still use your stylus to cut nearly any image from any website or screenshot you want, but now it's even easier to do so. Just tapping the button on the new stylus signals to your phone that you'd like to clip or edit selected content on the screen.

Need to quickly jot down a note? This new feature allows users to open an S Note instantly as a pop-up window anywhere on screen. It can also be set to instantly pop-up the moment you take out the Note 2's stylus so you can begin writing immediately.

Besides switching apps using the standard methods in Jelly Bean, you can use your stylus to scroll through your most-used apps in the blink of an eye. Using Quick Command, you can quickly activate frequently used apps using the S-Pen. All you have to do is swipe upward on thes screen with the S-button pressed and a command pad will appear, featuring all of your most useful apps.

Not only can you take screenshots with the Galaxy Note 2, you can also easily record an entire sequence of actions taken on the Note 2's screen. Record the progression of your drawings; from the outlining to the shading and final touches. Or record a video you're watching on your screen.

Using air view, you can preview all of your emails, photos or videos, before opening them individually. There's no need to endlessly scroll; just hover your stylus over your choice of media for a birds-eye view.

If you're like me, you're not the best at drawing straight lines or perfectly geometric shapes. With Idea Visualizer, your skill level doesn't really matter. This feature predicts the illustration to match your handwritten keywords, helping the visually-impaired create more beautiful sketches.

Because of the Galaxy Note 2's 16:9 aspect ratio, you can enjoy films the way they're meant to be enjoyed: in their original 16:9 aspect ratio. No more black bars on the top and bottom of the screen.

Both the calendar and native e-mail app have been fifted with S-Pen functionality, allowing the app to transform your scribbles into written words.

Open Two Apps at Once

Using Pop-Up Play, you can now open videos, webpages or S-Notes while you're doing something else. So the next time you're playing a game, you can also check your e-mail or doodle. Multitasking insanity, here we come!

Samsung premiered a bunch of innovative new photo-taking features on the Galaxy S3, including burst shot and best photo, which takes a number of photos in rapid succession and allows you to pick the best one. Best Face goes one step further, allowing you to choose the best face or pose of each person in a group portrait photo. So if one person is closing their eyes in one photo and looks totally alive and well in the next, you can choose the latter, and ensure that everyone looks good. It's I-didn't-even-know-I-needed-that features like these that make the Galaxy Note 2 so great.

Smartphone How To Master your Phone Samsung Galaxy Note 2
Never miss a story with NextPit via  Telegram 📲!

Android and iOS: 31 apps & games now free for a limited time only Rubens Eishima
How to connect an external drive to your phone via USB Pierre Vitré
Squid: The Android and iOS news app for millennials Fabien Roehlinger