The mini wave is rolling over the smartphone market and now the manufacturer HTC is jumping on the bandwagon. The HTC One mini was the definite star during the IFA preview which took place on the 16th of July in Hamburg where I had a chance to take a closer look at the device. HTC considers itself to be an innovative company but whether they deserve this title with the new mini device is still yet to be seen.

As expected, HTC kept the same design as the original One. There were, however, a few changes, like the shiny, ceramic colored-polycarbonate frame. With this tweek, it breaks away from the original design, and unfortunately seems slightly less high-end. When we asked why they made these changes, the HTC representative explained that the aluminum edges of the HTC One were simply too hard to build on such a small model. This makes me wonder how Apple managed to do it with an even smaller display. To me, the real motivation behind this is the desire for a cheaper manufacturing process, since HTC doesn't really have an 600 Euro (785USD) device in mind.

In terms of width, the difference between the HTC One and One mini was next to nothing: 0.1 mm is hardly anything. However the fact that it weighs 15 grams less than its older sibling is quite a positive change. Another point we noticed was the volume rocker, which is no longer one single button nicely integrated into the One's unibody. The volume controls are now comprised of 2 separate buttons which protrude significantly more than the original rocker.

The main keyword used here should be ''elevated,'' but not necessarily in the sense you would like to think. HTC put a lot of effort into precisely crafting their flagship device with no rattling pieces, and the company definitely hit the mark in creating something sublime and well-crafted. That being said, the One mini doesn't seem to live up to par, as I noticed that the presentation model's body wasn't very well rounded. In some places, it was slightly elevated, while in others, the display ran fluidly into the frame. This was definitely not a model from the series, so in theory this aspect could change and hopefully they will improve it when it hits the market. If you dismiss these small inconsistencies, the One mini seems just as high-end and well-crafted as its big brother.

The Super LCD2 display is obviously smaller at 4.3-inches. The resolution is set at 720p, and therefore not so sharp as the HTC One. This wasn't that noticeable though, since a pixel density of 3471 ppi is nonetheless quite high. The display is made of Gorilla Glass 2 like the HTC One. You’ll see how good this is in practice (like when you scratch or drop it). The camera delivered the same clear and sharp pictures that we are used to, thanks to the UltraPixel technology. That being said, we will have to test this out in an even more precise hands-on test when we are allowed more time with the device.

In terms of software, the mini is hot on the heels of the One. It comes with all of the functions known from its big brother, including Zoe and Blinkfeed, the sound-improving software BeatsAudio and BoomSound. The operating system is in fact the most up-to-date Android 4.2.2 and of course, HTC's trademark user interface Sense 5. This comes to us as a nice surprise.

The HTC One mini has definitely not strayed from its bigger version in this category. For the average user, this device will definitely be sufficient. That being said, smartphone enthusiasts will be left pouting. The price for the HTC One mini is currently set at 449 Euro (588USD), but once it hits the market we are sure that it will be lower. There is no exact date for when it will roll out, but we might be seeing it as early as next month.

According to the HTC presentation, the One mini is a ''change maker'', though this comes as no real surprise. On the one hand, building a mini version of the HTC One is quite a positive move. On the other, it will certainly be no easy task to pump people up about the mini device, like the manufacturer did with the HTC One earlier this year.

The HTC representative at the presentation stated that HTC doesn't want to ruin its reputation with the One mini which is built following the original One look and feel. The smaller device should keep the same promises set in place by the flagship. In my eyes, both do a stand-up job and since my time with the presented phone was quite short, I wasn’t able to take a deeper look into things.

For those who treasure the HTC One but don't like the size and/or price, then you might love this new alternative. This means, however, that you will have to accept lower specs and an extra coat of plastic. 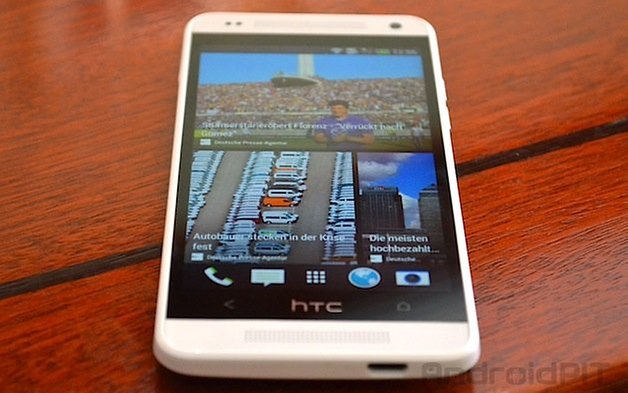 Pixel 4a 5G and Nest Audio: we don't need a Google event anymore Holger Eilhard
The best apps for Android Auto in 2020 David McCourt
"Alexa, you got so round." Amazon introduces new Echo range Julia Froolyks

Recommended by NextPit
The best true wireless earbuds you can buy in 2020 David McCourt
Free of charge today: these iOS and Android apps are available now Julia Froolyks
FOLLOW NextPit: