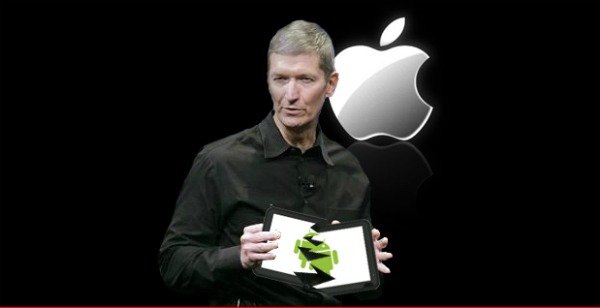 During Apple's unveiling of the iPad 3, newly appointed Apple CEO Tim Cook made some pretty harsh comments about Android, and was very quick to use some unproven and some completely FALSE statements to make their newest offering appear to be the only real consumer choice when it came to buying a tablet. While there are a few interesting details about the iPad 3, I personally didn't find it THAT impressive, and it really made me think about if Tim simply has no idea about Android, or if flat out lying about Android is simply something he feels he get away with doing due to the nature and mentality of Apple buying consumers. Let's take a look at a few of his comments, and you be the judge as to whether his comments had any merit, or were complete and utter BS.

Lets start out with Tims comments on Twitter. Mr Cook showed Twitter running on the iPad and on an Samsung Android tablet, and said the following:

"It kind of looks like a blown-up smartphone app — because that’s exactly what it is. Compare that to Twitter on iPad“.

Let me just start out by saying that this comment is not only sneaky and underhanded, it's just plain stupid and completely lacking of any common sense. As I'm sure both our readers AND Mr Cook is aware of, Twitters appearance on the iPad, or any other app for that matter, has NOTHING to do with if it's on Android or IOS. Rather, it is compeltely up to Twitter and THEIR DEVELOPERS on how they design the Twitter app for Android and IOS. Yes, Android's official Twitter app is not pretty..but that's Twitters fault, NOT Android's. Funny how the Tweetcaster app on my Galaxy Tab 10.1 that's optimized for tablets looks great, and that's all because of the developers who engineered it. Google Maps for IOS is very very limited when compared to its IOS counterpart, but is that the fault of Apple? Certainly not, but rather due to the developers and how they designed it. Tim simply wanted to TRY to make IOS look so much more superior, and unfortunatley, this strategy will work on many iPad buyers that don't think logically about why an app looks like it does. Oh..and by the way Tim...speaking of "blown up apps“, ICS fits almost EVERY app to the screen on my tablet...can you say the same for IOS?

Let's look at his next statement. When talking directly about Android tablets, Mr Cook goes on:

"NONE of their tablets are a great experience“.

WOW. You know what I really like about Google? The fact that they would NEVER say that the iPad delivers a bad experience. Google actuallypriced competitively enough or marketed aggressively enough to take off yet. That is quickly changing, and to say that all of them don't deliver a great experience is not only false, it's just silly. I love my Galaxy Tab 10.1, and even iPad owners are impressed by it. Asus, Sony, and many more have also delivered some great tablet's, so let's just stop with the "the ONLY good experience is with us“ talk shall we? Hardware wise MANY Android tablets are superior to the iPad in so many ways, and the OS is so much more intereactive, fun, and gives users more options and choices. That being said, I would NEVER say the iPad delivers a bad experience, cause it doesn't . It's simply a DIFFERENT experience. Common Tim..really.

Let's have another look at what Tim had to say, this time about the Nvidia processors that power Android tablets:

Ok Tim...what I will admit here, is that this statement is at least one that later can be PROVEN to be BS or truth, and as soon as we get our hands on an iPad 3, we will benchmark it against the Transformer Prime's Tegra 3 powered chipset to see these results. It could be that you're wrong, and it could be that you speak the truth, but at least you saying something that everyone will have a chance to confirm, and not just talking about how great your products are. Nvidia was quick to call Apple out on this, as Nvidia rep Ken Brown said that Apple failed to backup their claims with any benchmark proof as reported by Phandroid:

"We have to understand what the application was that was used. Was it one or a variety of applications? What drivers were used? There are so many issues to get into with benchmark."

So until the device hits the shelves and can be tested, I'll leave that one alone. It's really strange to me as well how Tim takes really direct stabs at Samsung, considering that you'll probably be pretty suprised that when you open up an iPhone or iPad WHOS parts you'll find laying in there (not all, but many). Also..."quad core graphics“? Nice way to cover up the fact that your processor is still a dual core and not a quad core chipset. Clever....And lastly, if Android doesn't concern you so much, why do you keep mentioning it and its partners at YOUR press conferences?

Oh well...in the end, it's about the iPad 3 and selling it to the masses, and since these dirty/untrue little statements seem to work for many Apple consumers, I guess you can't blame him. And no..I don't dislike Tim Cook..I actually kind of respect him for being one of the first who seems ready to sit and negotiate with Google rather than continue throw up lawsuits left and right. I have nothing at all against the iPad, but I sure will call anyone out on it when they make untrue comparisons. But the fact is this: When it comes to Android tablets, there's no denying that they are getting better and better by the day, and with Windows 8 and ICS/Jellybean tablets on the horizon, lets see how Tim is talking next year when the iPad 4 is released.

The best apps for Android Auto in 2020 David McCourt
Google Pixel 5 and 4a 5G: the final secret is out Holger Eilhard
Apple Watch 6: teardown reveals surprises on the inside Holger Eilhard