In our last poll of the week, we asked you several questions surrounding our smartphone camera. Now that you folks have voted, it's time to take a look at the results.  Last week, inspired by the excellent cameras on the Oppo Find X3 Pro, I, Ben, wondered what camera features are really important to members of the NextPit community.

Since the NextPit community spans users across several countries, the results also reflect opinions from our users in Brazil, Germany, France and of course, our English speaking audience from Europe, the US and India. The key takeaway from the results was the fact that mobile phones are the cameras of choice in all countries.

Smartphones are the most popular means to click photos

Let's start with the question of the camera itself: Which device does the average NextPit reader uses to click pictures? The answer is obvious: In all countries, the cell phone was the clear favourite. 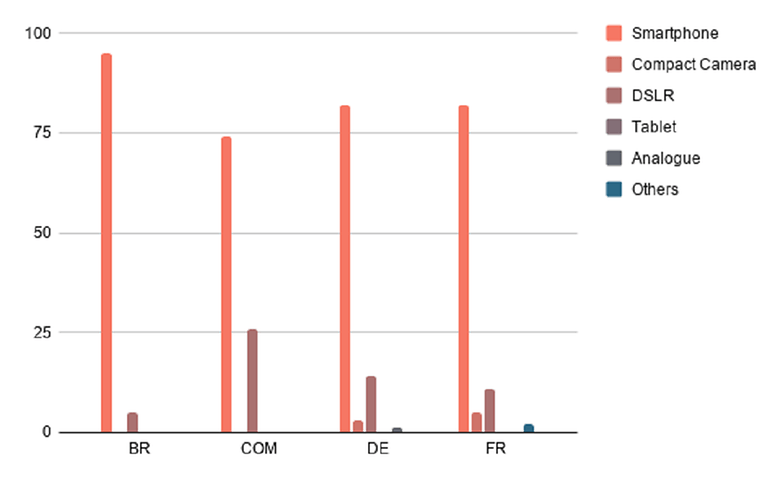 In addition to the smartphone, the DSLRs and DSLMs take second place in all countries. The frequency is most pronounced in the USA and India, although there were also relatively few who voted at all. We are thankful to know that no one takes photos with the tablet. There are also a few fans of analogue photography in Germany.

Which cell phone camera is the most useful?

While we were able to establish that most of us use smartphones as our main cameras, what about the usage of cameras on the smartphone itself? As expected: the main camera is the most preferred of the lot in every country except the USA and India. As an outlier, the English-speaking users rated the telephoto camera as being particularly useful.

An interesting finding is that our Brazilian readers like taking a lot of selfies.France is also open to creative ideas such as the microscope camera on the Find X3 Pro.

Which of these features are still in need of improvement?

Here are the areas where our readers wish for the most to come to as far as smartphone cameras are concerned. While our English readers want better telephoto and zoom capabilities, our friends from Brazil wish for more improvements to the night mode and low light images.

As expected from the second survey, ultra-wide-angle sensors are not particularly important in all countries.

Where do your pictures end up after they are taken?

In 2021, mobile phone manufacturers are increasingly omitting the micro SD slot and thus the possibility of memory expansion on their smartphones. If you are a NextPit reader, this should bother you for the reason that you use the internal memory to store smartphone photos. This variable is particularly well represented in all countries.

In Brazil, pictures end up on social media most often after they have been taken and immediately afterwards they are shared on WhatsApp, Telegram and Co. Here, Brazil is an exception, because sending via Messenger is only second in the statistics in all three other countries. Our English speaking and German brothers in comparison are more likely to put up these pictures on a wall.

From just being a nice feature to have, the camera on our smartphones has blossomed into a real alternative to conventional cameras. Perhaps it is because of the ease of use, the thoroughly satisfactory results and the simple possibility of further processing that cell phones have become so popular as photo capturing tools.

If we had to create a market analysis for cell phone manufacturers from this survey, I would advise them to have better main cameras. The notorious pseudo additional lenses for macro and depth information could certainly be omitted for most readers if the main camera delivers better images.

In our weekly poll for this week, we want insights from you about the camera usage on your smartphone. Do you prefer shooting from the main camera? Or do you prefer the ultra-wide range camera? How often do you use the telephoto lens? We also want to venture a little prediction ask you what you think will be the next big thing in mobile cameras.

Back in the days when smartphones like the Sony Ericsson W810i and the Nokia N Gage QD didn't even sport a camera, we could hardly imagine that cell phone cameras would eventually become a serious alternative to our DSLRs. Things are a lot different today, though! In fact, cameras on smartphones have become so important, you've named them as one of the main incentives behind buying a new phone. It is also undeniable that the smartphone camera space has seen phenomenal advances in the past few years and that the space continues to evolve as we speak.

If we look at some of the flagship devices announced within the past few months alone, there have been several camera features that have never existed before in this form, or at least in the same quality. For example, Oppo came up with something called a 'Microscope camera' on the Find X3 Pro - a feature that lets them capture details that were beyond the capability of smartphone cameras. The phone is also the first device that allows amateur photographers to capture, edit and view images on the display entirely in a 10-bit workflow.

Samsung, on the other hand, has focused more on powerful telephoto cameras on the Galaxy S21 Ultra.  And at the end of the day, the sheer versatility offered by these cameras does become a key factor when a customer is out to purchase a new device.

Which device do you use as your main camera?

Let's take another step back, switch to the mental ultra-wide-angle camera and look at the big picture. Personally, I probably take most pictures with my phone, but for "serious" shots I still use a system camera - a Sony Alpha 7 II to be precise! What's it like for you guys?

I have a strong suspicion of already knowing what will come out of this. Of course, we have to allow for a bit of bias here, since NextPit is primarily a smartphone magazine. I'm still looking forward to your answers!

Telephoto, wide angle, ultra wide angle - which do you find most useful?

Let's move on to the question about each camera on the back of your smartphone. Since the question about usage will probably be won by the main camera anyway - after all, the phone already uses it automatically when you open the camera app - it's more about which lens manufacturers should plan the most development for in your eyes.

Personally, I find the combination of a good main camera and a good ultra-wide-angle to be the most practical when taking photos. Colleagues always rave about good telephoto cameras though - so I'm very excited!

What feature is most important to you?

With a bit of luck, we already know which lens we want to see the most improvements for in the future. But what makes each camera better in the first place? Let's get to some features that should just get better.

Again, do you guys want my own opinion? I'm pretty undecided here, as cell phone pictures have more of a sentimental value. If there's some blurring in the process, I don't really care. I'm more likely to be a complainer with my "real" camera. That's a good follow-up question!

WhatsApp or living room - where do your pictures end up?

While cell phone photos are getting better and better, our interaction with the finished photo is also changing. Back in the day, you would have been hell-bent on just forgetting about the pictures after you took them. Nowadays, pictures quickly disappear into cell phone memory. So:

I've allowed multiple choices here, as I think it's going to be hard to make a completely definitive statement here. At some point, I started to hang my elaborate photos on the wall, i.e. those that are taken with the camera and then run through Lightroom. Really fun to see the pictures in the apartment over and over again.

I could probably think of 200 more surveys on the topic of smartphone photography, but I don't want this article to become a mammoth task for you over the weekend. If you have more ideas about smartphone cameras, you're more than welcome to discuss them in the comments!

Xiaomi's 200MP camera phone leaks in the wild
Android 13: Which phones are expected to get the update?
How to share access to your Home app devices

Android 13: Which Samsung phones will receive the update?
Android 13: Everything about Google's new operational system
Free apps for Android & iOS: These Pro versions are currently free