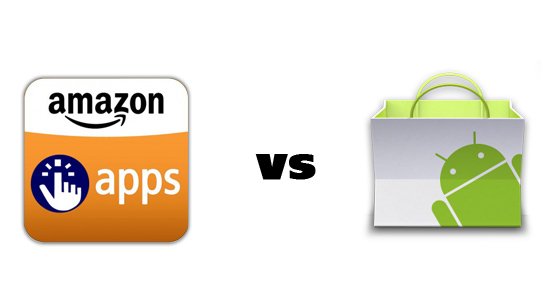 Is it just me, or is Amazon in the habit of taking a concept that's centered around Android, tweaking it to their own liking to the point to where you can barely tell it had anything to do with Android, throwing their extremely powerful branding across platforms and hardware built on Android, and then using their all powerful and existing consumer database to mass market the hell out of those concepts? Why yes they are, and the concept works WELL. Android tablets not selling well? No problem for Amazon. Amazon: "Let's make an Android tablet and call it the Kindle Fire". End result? The ONLY Android tablet moving big numbers. Amazon: "Ya know, that Android marketplace is really nice. Let's build our own Appstore on Android and give away a free paid app everyday“. End result? Slowly, their appstore is growing so lucrative that many developers are now making more money on their apps in Amazon's app store rather than Google's.

Google's Android market is still the most profitable for Android devs, but recent studies show that many top developers of very successful apps are seeing greater revenue gains from selling their apps on Amazon's app store. Out of the 110 top apps that were available in both app stores that generated at least 200 dollars a day in the last week of January, 42 of them generated more revenue in Amazons store. That's damn near 40 percent. Overall, 28% of revenue from top apps was generated in Amazon's app store, and after the release of Amazon's Kindle Fire tablet, Amazon's app store downloads rose 14 fold in December (when compared to October's downloads).

Amazon's store is still far behind Google in terms of apps that can be found on its market, as Google's Android Market still has around 14 times more apps that Amazon's. But Amazon is catching up quick, and in December and January, the Android Market had only around 5 times more new apps than Amazon. Currently, around 50% of the apps in Amazons store can also be found in Google's Android Market. Android's market has way more free apps than paid apps, but Amazon's app store has way more paid apps than free ones, making it a great way to increase app sales for developers who focus on only developing paid apps. 65% of apps on Amazon's market are paid apps, while the Android Market fell to 32% paid apps.

Another reason it's attractive is that top apps are generally cheaper in Amazon's store, and users will pay about 40% more on the Android Market vs Amazon's app store for top apps. It seems that developers are flocking to Android now more than ever, and that Android may very soon overtake IOS as the platform of choice for app developers.

All in all, Amazon's trusted name and service is a powerful weapon in Google's arsenal, regardless of how affiliated they are with Google directly, and it's good to know that Android developers are getting more and more options on getting their apps to consumers on multiple marketplaces.

Apps Amazon
Never miss a story with NextPit via  Telegram 📲!