For some, the old school Samsung S-class still gives a lot of bang for the buck. There are some interesting differences from its predecessor, the superb Galaxy S6. Let's take a look at how they match up in our Samsung Galaxy S7 vs Galaxy S6 comparison.

Back in the day, the Galaxy S6 polarized many Samsung fans with its fresh design. Its stylish glass and metal construction was clearly more attractive than the Galaxy S5, but it came at a price: a microSD card and removable battery.

It was a double-edged sword. Aesthetically, the S6 design was a step in the right direction, but some of the Galaxy series' biggest fans were unnerved by the removal of these key features.

In terms of looks, the S7 is remarkably similar to the S6. It comes housed in another glass and aluminum body, but the camera sensor bump on the rear has seen a four-fold reduction in size, allowing the device to lie all but flat on a surface, while the heart-rate monitor and fingerprint scanner remain as before. This is a vast improvement over the clunky S6.

The edges of the S7's rear panel now curve towards the frame, just like in the Note 5. This makes the phone less slippery and more ergonomic. The S7 fits more naturally into the palm of the hand than than the S6.

But the crucial difference between the devices is the Galaxy S7 supports microSD cards. It is also waterproof IP68 certified, unlike the Galaxy S6, and is marginally thicker, with good reason: it contains a larger battery, which we will get to later.

The Galaxy S6 introduced a QHD (2,560 x 1,440 pixels) display to the S series and it was a success. It has deep, rich colors and incredible fidelity. So did the Galaxy S7 beat this?

Not really. The S7 also packs a 5.1-inch QHD screen, so we didn't see it as an improvement in our review. The screen is still sublime, the detail is excellent and has the highest display standard. The device is still readable even in bright sunlight.

The Galaxy S7 employs an Always On display, a plus over the S6. The S7 also uses an AMOLED screen, which allows individual pixels to be illuminated.

This feature allows a small number of pixels to remain illuminated, even when the device is asleep, displaying the time, the date and notifications. The impact on battery life is small but still noticeable.

The Galaxy S6 has a splendid camera which, despite not ranking on our best Android cameras list, was one of the strongest offerings from a manufacturer at the time. It's capable in low light, rarely overexposed in daylight and provides natural colors.

Galaxy S7 camera has reduced the number of MPs on the main camera from 16 MP to 12 MP. Both devices have a 5 MP camera. While the new camera may produce a lower number of pixels, it makes up for this with dual-pixel technology; a feature that increases image clarity despite the lower pixel numbers.

The camera's aperture is also lower, at f / 1.7, which means better low-light performance. Together, these enhancements mean that the Galaxy S7 focuses up to four times faster in low-light conditions and twice as fast in daylight.

Last year, Samsung reduced the battery capacity of its Galaxy devices. Both the Galaxy Note 5 and Galaxy S6 sported smaller batteries than their predecessors. This wasn't a popular move.

This year, however, Samsung has responded to criticism and packed the S7 with a 3,000 mAh battery, which is bigger than even that of the Galaxy S5. Unfortunately, Samsung still hasn't adopted USB Type-C; the S7 remains on microUSB.

Head of Technology and Platforms at Samsung, Nacho Nieto, explained to us that the S7 battery is malleable and a 3,000-mAh variant was the only option. The moldable battery can also be customized so that it fills the available space within the phone, which was not possible with the battery used in the S6. 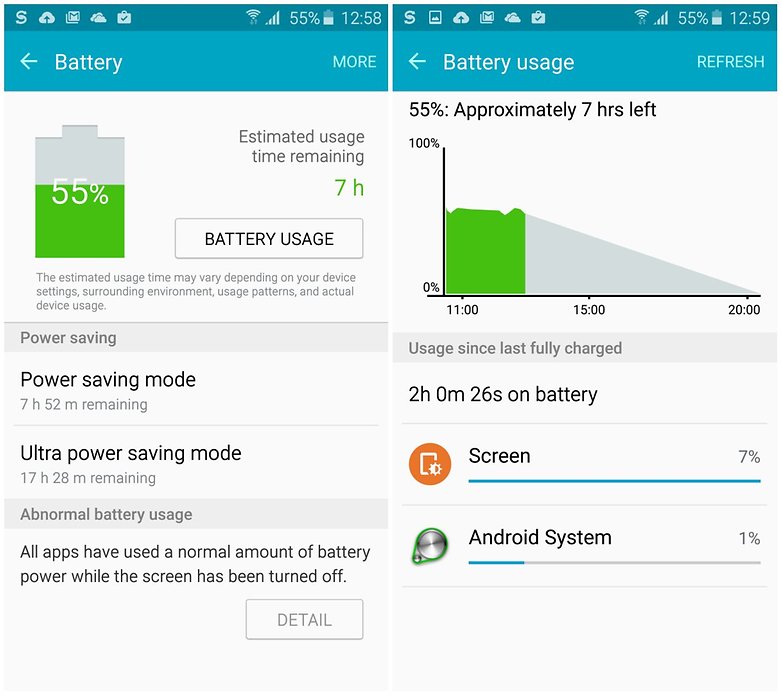 Samsung equipped the S7 with software features intended to save battery. These keep us vigilant when the device is being used and put apps into a deep sleep mode when they have been ignored for three days.

This provides extended standby time without limiting functionality. When other manufacturers attempted to include similar features, it meant that sometimes messages or emails arrived late, making the feature more a burden than a boon.

With a current generation processor and an extra gigabyte of RAM – 4 GB compared with 3 GB – the S7 is faster than the S6. Having said that, the Galaxy S6 is already a pretty speedy gadget and we suspect the difference between them will be negligible for most users.

You can see the two benchmark tests below.

Samsung has done a good job of addressing concerns users had with the Galaxy S6. The Galaxy S7 features an increased battery size; improved ergonomics and the return of water and dust resistance, along with the much beloved MicroSD card slot. It's almost as if Samsung wanted to revel in past glories while building towards new ideals.

Samsung has made key improvements in areas of contention: the return of microSD card support, subtle but noticeable improvements in the design and a larger battery all make the S7 an improvement over the S6.

The S7's price started at US$699, but the current price of $470 is much easier to swallow. If you're still hanging on to an old S5, there's no doubt that the S7 is a great device to upgrade to.

So what do you think? Let me know in the comments.

Where to buy Samsung Galaxy S7

Show all comments
Recommended by NextPit
How to download WhatsApp to your Android tablet David McCourt
How to fix connection problems on Facebook Messenger Antoine Engels
FOLLOW NextPit: