Since the launch of the Moto G4 series in 2016, Motorola hasn't released any Play versions of its phones, like the Moto G4 Play and the Moto X Play. These devices have become known among users for delivering a longer battery life and good performance for a number of tasks. Moto Play has now returned. Does it still have a place in the market?

No price or release date is confirmed for the US yet, but we can estimate the prices from the European market. The Moto G6 Play should therefore be around $199. We'll keep you updated as soon as we know more.

It looks like Motorola liked the look of the Moto X4, to the point of following a similar visual design for the G6. The Play is no exception as we have a glass panel on the rear which has a reflective finish from the top, through the camera sensor and down to the bottom of the phone, which looks great when you move the device.

Of course, having the design similar to the Moto X4 is not a problem, quite the opposite. It's a welcome choice that has even been improved on with the G6 Play. The display has reduced bezels, but isn't bezel-less. However, for an entry-level model, the display is one of its strengths.

The finishing on the front with reduced bezels improves handling, because it has smaller dimensions and better use of the screen. Another positive point here, although it's subjective to the taste of each user, is the addition of the fingerprint sensor on the back, not the front, which was a position that Motorola had not yet implemented. Generally, when a manufacturer goes through this process of cutting down on space, the fingerprint sensor ends up changing position.

Overall, the Moto G6 Play delivers a solid and more sophisticated look, one that the Moto G4 Play didn't achieve by being created using plastic.

A screen for new horizons

With the Moto G6 line, Motorola enters the era of panels with the in-trend 18:9 resolution. Named Max Vision by the brand, which is a term that tries to convey to the user the idea of the ​​developments they have made in multimedia terms. After all, if the model comes with such a suggestive name as play, it makes sense to offer a decent screen for videos and games.

The resolution is nothing special, which is HD+. This is nothing more than the traditional 720p but of course with a larger screen, this might sound disappointing. But, it's a 5.7 inch IPS LCD panel that I consider a great size for entertainment overall.

What's under the hood?

Motorola made history with the Moto G line when, in 2013, it was one of the first to market a device with fair hardware available to users. We had 1 GB of RAM in the first Moto G that year, and now five years later we've evolved to 3 GB in the most basic model of the sixth generation. It might not sound like much, but it's enough for the G6 Play to deliver a performance appealing to countless users who don't demand a lot from their device.

Opening and closing Instagram, WhatsApp, and email here every 10 minutes or so won't be a problem, and you can include some less demanding games games and photo editors in your account. The big limiter here is the processor, not RAM or storage, of 32 GB, because the chipset brings only a small upgrade from its predecessor, the Snapdragon 430 replaces the 410. 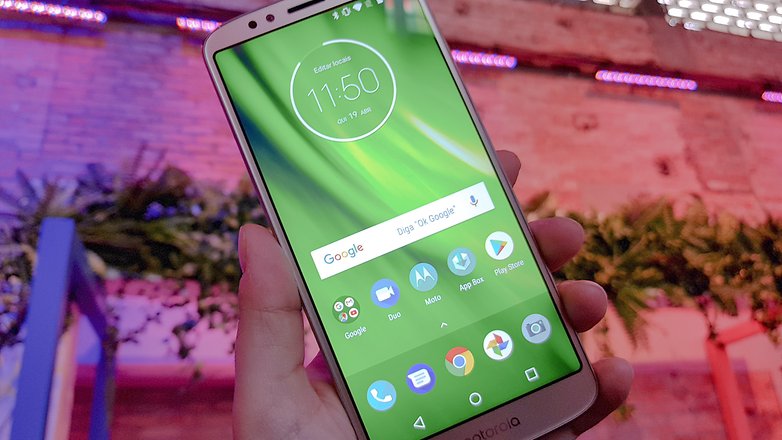 Of course, our full review will test the G6 Play performance, but at the moment, the set that Motorola is offering is looking good. Another example of the upgrade are the cameras, which are an improvement from the 2016 model. In addition a 13MP camera, the phone can record videos in slow motion, a feature that would have been unthinkable two years ago. This sensor has f / 2.0 aperture and comes with some extra features in the software, such as manual and panorama mode.

Motorola has also done a decent job with the front-facing camera, which has an 8MP sensor. This comes with beautification mode and also records in slow motion. In fact, it seems that Motorola has paid special attention to the cameras of the new models because all sensors have a good number of megapixels, and the software is more efficient with better features.

Motorola is clear in stating that in the company's lab tests, the G6 Play can deliver more than one day of power with only one charge. This is more like 36 hours, which is almost double what the company promised with the G4 Play. Incidentally, I must emphasize here that the G6 Play has support for fast charging, TurboPower, and the compatible charger comes included in the box. The 4000 mAh battery needs this, as it would take forever to charge with conventional power, and that wouldn't be practical.

Of course, lab tests done in optimum conditions don't always compare to real life and our individual way of using a device, but we know that the G6 Play should deliver 24 hours. This is a good show from the brand, since we go beyond the conventional 8 hours of daily use.

The change in battery capacity is also positive when you consider what's on the market, since other models, for example, from Asus are on sale for similar prices ​​as the Moto G6  Play and have battery capacities between 4000 and 5000 mAh. The less powerful processor, the Snapdragon 430, can also manage power more efficiently. More battery life is always a plus!

Oreo out of the box

The entire Moto G line in 2018 brings Android Oreo, which should popularize this version of the system in the country. It may also help, along with Asus, to push other companies to also provide the Oreo to their handsets.

It's not yet certain that whether it will be updated to Android P, and because it's cheapest device in the line, it is better to wait for some information from the company. Visually, it follows the same version of Oreo as the Moto X4. It's a pure Android version, but with some clear modifications from Motorola on items like the icons and the Moto app.

The Moto G6 Play is a device with strong features, such as an elegant design, cameras that deliver good results, modern display and, above all, a long battery life. These are just our first impressions however, so be sure to check back for our full review as we might change our minds.

But, as the saying goes, the first impression is the one that stays. Overall, we have a strong competitor here for the market at a great cost and many great features for the user.

What do you think of Moto G6 Play?

Get the Apple AirPods 2 for less than $100 today!
Lord of the Rings: Rise to War hands-on | Conquer Middle Earth!
Redmi Note 11 Pro vs. Redmi Note 10 Pro: What does the new mid-range phone offer?

How to fix the Speech Services Waiting for network connection notification
Opinion: How Google Pixel 6 Pro drove me towards the iPhone
Free apps for Android & iOS: These Pro versions are currently free