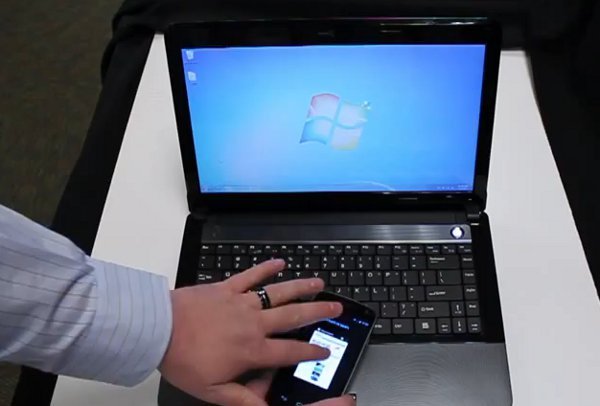 NFC is slowly becoming Android theme of the year, even if most devices on the market don't yet offer the new data transfer protocol. I personally haven't really gotten to play around with NFC technology much besides a couple of quick demos with the Galaxy Nexus and up till now, I hadn't been that blown away by the new technology. But a new video from Cirque shows a use for NFC that I can really get behind. Say goodbye to Bluetooth; NFC is here for all your data transfer needs.

In the tech demo, Cirque shows just how useful NFC could really be. Most people are probably familiar with the mobile wallet concept, which has taken centre stage in presenting the new data transfer technology, but I find the application displayed in the following video much more interesting. In it, a laptop with an integrated NFC chip is used to quickly transfer data including web address, contacts, maps, etc and quickly and easily be transferred and synced between a Galaxy Nexus and the laptop.

The possible uses for NFC in this regard are immense. Imagine no longer having to log in to a computer. Instead, just by sitting down near it and using your phone to “log in” with NFC, your computer could automatically boot up with your account, your settings and the programs you most often use. That strikes me as a more then useful use for the new technology.

In any case, I'm actually starting to get exacted about the possibilities of the new technology. Maybe the Galaxy Nexus might just be my next phone after all.