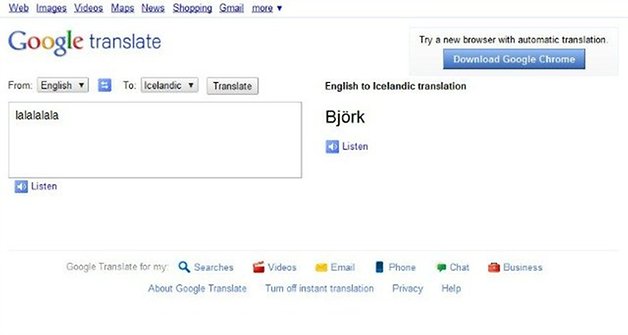 Google Translate also has a humorous side. Let's say you're bored at work but have limited access to hilariously awesome sites like ours. What can you do to pass the time? Why not try entering some gibberish into Google Translate and seeing what kind of noises your computer makes. It's fun! It's stupid! And it's why I love Google a lot!

...And press "beatbox" to hear your sound creation.

Or, to hear the techno version, select Chinese to Chinse. Clearly, some programmers were suuuper bored.

Rev Up an Oldsmobile

If you type in these words:

Google Translate will make the sound of an engine revving up. Because, why the hell not?

Hear a Danish Man Laughing at You

You know what my day needs more of? Danish men laughing at me. I really would like some Danish laughs in my face. That would brighten my day for sure. So I'm just going to enter in the following words:

Then hit "Danish to Danish" and...welll...yeah.

OOOOOOOOOkie dokie then. Anyone else have more Google Translate tips and / or tricks?