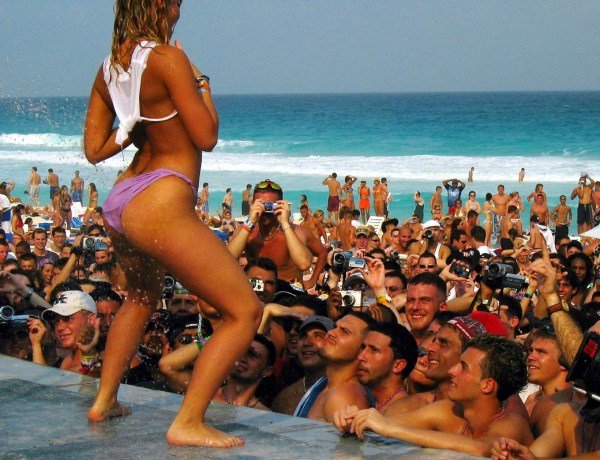 Every once in a while, the reporters at the New York Times feel compelled to write an article about college culture if for no other reason than to show us that they're still a hip paper, unlike the stodgy Wall Street Journal. This time, the paper's Florida beureau sent reporters to Spring Break party destinations like Key West to interview drunk, vomiting college students about what Spring Break is like these days. Apparantly, there's less vomiting. And it's all because of the presence of smartphones.

According to the reporter Lizette Alvarez, smartphones–  like Android – are the new school dance chaperones; monitoring the activity around them and shaming young people into keeping their pants on. Smartphones have "tamed" Spring Break drunken escapades, as those involved are too afraid of incriminating evidence showing up online to really let loose. Spring Break has been "Facebooked" into greater respectability.

For the record: Key West is a very upscale place to party. So it could just be that the majority of rich college students being interviewed by the New York Times are worried their future internships at Goldman Sachs will be threatened if that photo of them doing a kegstand upside down ends up on their Facebook page. I, for one, doubt that most other college students are taking these preventative measures. And I'm also doubtful of any trend piece that claims to speak for millions when only a dozen or so folks have actually been interviewed.

Still, there's no doubt that smartphones have intruded on our personal lives and made it far easier for our frenemies to embarrass us. That said, How about simply untagging photos and messing with privacy settings so your parents and / or boss can't see you passed out with a penis drawing on your face? Always worked for me...

How to control your Apple Watch without touching the screen
OnePlus Nord Buds hands-on: Unbeatable at first glance
iPhone 14, Airpods Pro 2, and the new Apple Watch announced this September 13?