The process of taking a screenshot has been simplified and standardized over the years and, on most devices, just press the power button and low volume simultaneously. Some brands, however, use a different key combination or offer even more intuitive modes. So here's how to do it on different Android smartphones.

How to take a screenshot on Android

Since the upgrade to Ice Cream Sandwich, the process of taking a screenshot has been standardized and consists, for most devices, in the following key combination:

You will need to press and hold the power button for a few seconds at the same time as the low volume button until you see the animation appear and you hear the sound of the shot. The shot you just took will be easily found in the gallery of your smartphone and in the internal storage in Pictures/Screenshots or DCIM/screenshots.

Take a screenshot on Samsung smartphones

The latest Galaxy smartphones, like the S10 and Note 10 series, rely on the classic key combination described above due to the lack of a physical home key. As for the older models, Samsung stands out from the crowd with an alternative key combination:

Considering that Samsungs are among the most popular smartphones among Android users and among the best sellers in the world, perhaps it is the mass that wanted to distance itself from the South Korean brand, snubbing it. In any case, the latest generation smartphones of the brand also give the possibility to make screenshots with a move from karate:

Once activated, you can forget about any key combination and take pictures of the screen in front of your eyes by simply passing the palm profile of your hand on the screen, from right to left or vice versa.

If you own a Galaxy Note with an S-Pen, you will have three different ways to take a picture of your screen. Open the Air Command Menu and bring the digital pen closer to the display, now press the side button of the S-Pen to get the following options:

Google Pixels offer stock Android, the purest version of the operating system without the customizations offered by other brands. On these devices you can take a screenshot in this way:

Take a screenshot on Xiaomi smartphones

If you have a Xiaomi smartphone in your hands, you have three different ways to take a screenshot:

Take a screenshot on LG smartphones

LG uses the key combination Low volume + Power button but on older models makes the operation a bit complicated because of the positioning of the keys on the rear body, one underneath the other. A bit of practice is enough to get our hands on it but, alternatively, you can use QMemo+/Capture+ the LG note application from the notification area.

Fortunately, on newer devices, such as the LG G8, LG G7, LG V30, V30s and V40 ThinQ, the combination has become easier thanks to the return of the volume keys in the side frame.

Take a screenshot on HTC smartphones

Subsequent HTC models have on-screen navigation keys, so the only solution available is the classic combination of Low Volume + Power Key.

On Huawei and Honor smartphones you can take a screenshot using one of these modes:

Take a screenshot on OnePlus smartphones

On OnePlus smartphones you can take a screenshot like this:

Take a screenshot on Nokia smartphones

In the case of Nokia, there are different possibilities depending on the device available. You can:

Take a screenshot on Sony smartphones

The Japanese manufacturer goes straight to the point and allows you to take a screenshot on your devices simply by using the physical keys: Low Volume + Power Key.

How to take long screenshots

Some brand manufacturers allow you to take screenshots out of the lines called Scrollshots. This type of screenshot is particularly useful for capturing long texts or websites. But how do they work? The software takes the first screenshot then scrolling down takes the second and so on. 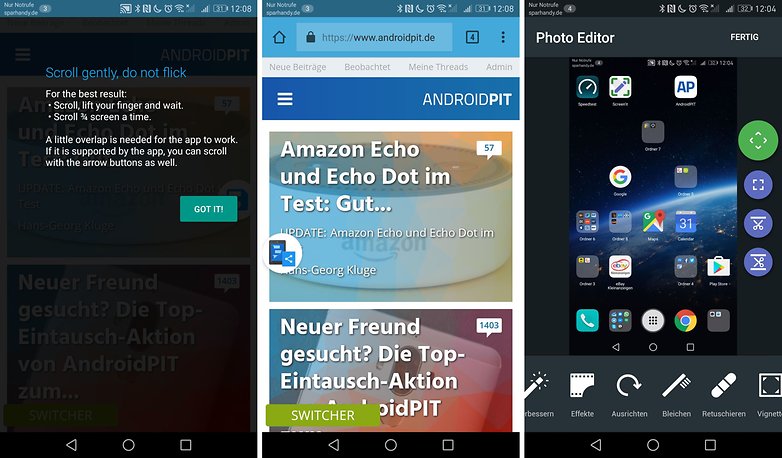 How to record the screen in a video

Some Sony devices have a feature that allows you to record the screen. To access it, simply press and hold the power button. The recordings are saved in MP4 format in /Movies/ScreenRecords.

Huawei also allows you to create a screen video using knuckles. In the Mate 20 Pro you just have to knock twice on the display to record the video. In the Samsung Galaxy S9 you have to take advantage of the Game Launcher and the feature is limited to games.

Also in this case for devices that do not integrate this feature comes to the rescue of the Play Store offering AZ Screen Recorder. Using your smartphone's microphone, you can also integrate audio comments into the video.

Where to find taken screenshots

Once you have taken your screenshot, whatever the method and smartphone used, you will find it in your photo gallery. Then, by accessing your Gallery, you will find a dedicated folder called Screenshot/Shields.

What device do you have and how do you take screenshots on your Android? If you're using a smartwatch, here's how: