Today I've taken on the rather intimidating task of pitting the legendary 2013 Nexus 5 against the best that Samsung has to offer right now, the Galaxy S5. I'm a Nexus 5 owner, but I've used the S5 plenty so I'll try to be as fair as possible while adding my opinions based on prolonged usage of both phones. I think we all know there's no way I'm getting out of this one alive no matter which phone I choose – the Nexus/Samsung rivalry is almost as strong as the Android/Apple one - but let's put them side by side and weigh up our options. [Update: video comparison added]

When it comes to build quality there's nothing wrong with either of these phones: both are built nicely and have their benefits. I like the tackiness of the rubber on the back of the Galaxy S5, if not the look of it, but there's a lot to be said for the particular rubberized plastic that Google chose for the Nexus 5 too. The Nexus 5 has been criticized for being a bit boring looking and the S5 for being ugly and I agree with both of these judgments to a degree. The S5 is a bit wider and taller than the Nexus 5, but it has a marginally larger screen. The bottom bezel is about the same on both, although the Samsung has a dedicated home button that also serves as a finger scanner for unlocking. Both phones have a notification LED.

The S5 has a rounded silver plastic trim around the edges whereas the Nexus 5 has harder edges but is nicely curved at the top and bottom. Both devices have buttons in all the same places, but the S5 has an IR blaster and a water-resistant flap over the USB charging port on the bottom. The Nexus 5 has a bottom mounted speaker with dual grills (the other houses the microphone) and the S5 has the speaker on the back. Samsung opted for a central location for the square camera lens with the heart rate monitor and flash beneath it. The Nexus 5 shifts the circular camera lens and flash to the corner. Both camera lenses protrude a little. If I had to pick one over the other for looks I'd go with boring over ugly but as far as other considerations like microSD expansion, removable battery and water-resistance, it's clearly the S5.

Ah, the age-old battle between LCD and AMOLED. The Galaxy S5 has a 5.1-inch Super AMOLED screen and the Nexus 5 a 4.95-inch IPS+ LCD. They're both sporting the same resolution (Full HD, 1,920 x 1,080 pixels), but due to the Nexus 5's slightly smaller display the pixel density is marginally higher at 445 compared to the S5's 432 ppi. As usual, the Samsung display is super bright, saturated and provides high contrast. The Nexus 5 can't keep up in terms of brightness or color, but it all depends on whether you like saturated colors or not. The Nexus 5 screen is a little pinkish and the S5 a little cooler. I find reading to be easier on the S5 but image colors are a bit too saturated for my tastes. The S5 is definitely more visually vibrant than the Nexus 5 and if I'm handing out awards the S5 gets it.

Full disclosure: I like stock Android. This is why I chose a Nexus device in the first place. I generally dislike much of the bloatware and gimmicky software features that Samsung put on top of the Android system and that TouchWiz is ridiculously slow as a result, even in its new trimmed back version. Having said that, the S5 has way more going on than stock Android, so if you like lots of built-in features straight out of the box the Nexus 5 will appear very limited. However, this means that the Nexus 5 is much faster than the S5. If you want to see more about the two user interfaces you can check out our TouchWiz vs stock Android comparison but here's my two cents' worth.

The notifications shade on the Nexus 5 is very clean and minimal compared to the S5's slightly bloated affair. As with most things though, the S5 offers more options in this area than the Nexus 5. Likewise the Quick Settings: the S5 has a huge list of round buttons and the Nexus 5 a more trimmed back grid of square tiles. Samsung lets you arrange the apps in the app drawer how you like, whereas the Nexus 5 just lists them alphabetically. In the settings, the Nexus has a clean list of options where the S5 goes for colorful round icons in sub categories which can be collapsed or expanded (you can also switch to a list view in TouchWiz though).

As far as the added features that are available, the S5 has a heart rate monitor and S Health app built in to monitor and track your fitness efforts. There's also the finger scanner for an added layer of security and the fantastic Download Booster and Ultra Power Saving Mode. Samsung has added the My Magazine home screen for a curated newspaper along the lines of Flipboard (the Nexus 5 has a dedicated Google Now homescreen which you can also access on the S5). If you're comparing features, the S5 wins hands down for sheer volume, but if a pared back system is what you are looking for then stock Android is for you. Of course, stock Android is also updated much faster than Samsung's firmware releases which also take up much more space.

The Nexus 5 appeared closer in time to the Galaxy S5 than it did to the Galaxy S4. This later release afforded Samsung the opportunity to put a better processor inside with a higher clock speed, even though the Nexus 5 was at the top of the pack when it was released. The Nexus 5 is still the faster device though thanks to TouchWiz, and is let down by its lack of some of the great features that TouchWiz does bring though, so it's six of one, half a dozen of the other. More features also tend to come with more unnecessary features as well, like the finger scanner for example or the heart rate monitor for some. On the plus side, the S5 has a larger and better performing battery than the Nexus 5 and it is also removable, so on the hardware front the S5 gets it, even if it is a bit slower and may have added features no one actually wants, but still has to pay for.

The Nexus 5 suffered from lackluster camera performance from day one although the camera performance has improved significantly with Android updates and the new Google Camera. Nevertheless, the 8 MP camera is no match for Samsung's superior auto-focus, numerous settings and dynamic range. In most conditions the Nexus 5 posts equivalent results and occasionally better, but it's not enough to beat the sheer resolution and options available in the S5.

Note: Images in the gallery were taken at full resolution on each device, producing a different aspect ratio. I have simply positioned the images at the same size to show the same details. 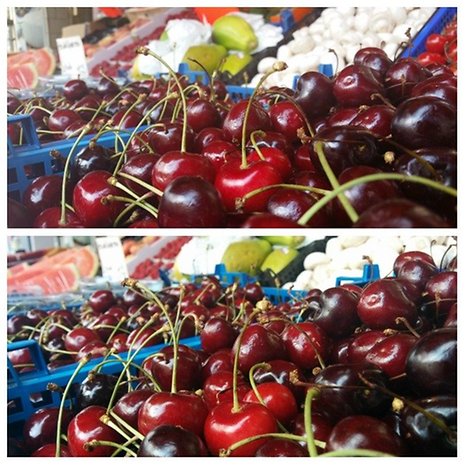 As a Nexus 5 owner and lover, I obviously have a bias towards the stock Android experience, but when it comes to what you get in the S5 I think it's clear that on basically every front above the S5 is superior. I can live with TouchWiz lag, just, and disable or ignore the features I don't like or need. Not all hardware add-ons on the S5 are really necessary but the basics are done very well, and some are critical, like microSD, which we'll never see on a Nexus device. Likewise, there's aspects of Nexus that Samsung can never hope to emulate, like a truly speedy interface and rapid updates.

Which brings us to the other major selling point of the Nexus 5: it's cheap. For 350 USD you get an excellent base device with no bells or whistles, compared to the 599 USD price tag for the S5. If speed, price, lack of bloatware and rapid updates are important to you, the Nexus 5 has it by a long shot. If built-in software features, hardware additions, camera and battery are the deciding factors for you, then it's the S5. While I love the Nexus 5, the presence of a microSD slot, a better battery, higher resolution camera, water-resistance and other features I actually like on the S5 make a pretty compelling argument. I haven't jumped ship yet, but a Google Play edition Galaxy S5 might just convince me.

Which device would you buy? What is the biggest selling point for you?

Show all comments
Recommended articles
Center Stage on iPad Pro: How to activate automatic tracking Stefan Möllenhoff
Our top 5 Android and iOS apps of the week Antoine Engels
FOLLOW US: