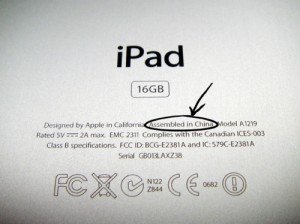 Apple is no stranger to aggressive lawsuits based on dubious legal claims, but a recent decision in a Chinese court has turned the Apple vs. World narrative on its head. According to the Financial Post, the American manufacturer of the popular iPad tablet PC line has been ordered by a Shenzhen court to drop their use of the iPad name or shell out a staggering $1.6 billion to a local hardware manufacturer.

How do you say Schadenfreude in Chinese?

The recent loss from Apple is the culmination of seemingly benign trademark registration more then a decade ago. Back in 2000, Proview technology, a small flat-screen producer flush with cash from the tech boom of the late 90's, registered the iPad name internationally as their new monicker for products ranging from LCD displays, to TVs, radios and even security equipment. But the market was not kind to the small Chinese producer and in 2009, they agreed to sell the international rights to the iPad brand to Apple for the low, low price of $55,104 in an attempt to offset some of their $64 million debt.

While the global rights were gone, Proview apparently hung on to the domestic (i.e. Chinese) iPad trademark, meaning that when Apple launched their popular brand of tablet PCs in China, they were officially violating Proview's trademark. Of course, this was a simple oversight on Apple's part but this technicality might just end of costing them a fortune.

Apple vs. Proview– Round One

The legal wranglings have been underway since 2009, when Proview filed suit against Apple for trademark infringement and caused a pro Forma counter suit from Apple for their troubles. Apple's claims that Proview was in fact violating their trademark, was recently rejected by a Chinese court and Proview CEO, Yang Rongshan, has promised they will be suing for Apple in both the U.S. And China for several billion in damages. What's more, taking a play from Apple's European strategy, they are also aggressively attacking Apple importers and resellers in China, seeking to halt the import and sale of iPads.

Of course, this is just the start of a legal conflict that will most-likely drag on for years but if lawsuits have really become the new paradigm in international marketing strategies, it's nice to see that it's not just the Android community that's getting all the abuse.