Today we're putting the LG G3 up against the HTC One (M8) in our comparison of the two Android smartphones with the most interesting cameras going around right now. There's some interesting similarities between the two devices but also some significant differences that go beyond mere numbers on paper, so read on and see where those differences lie and how important they are to your flagship hit list.

Both of these phones look great: the HTC One (M8) has built on the successful design of the HTC One (M7), although not everyone is a fan of the big bezels, especially along the bottom of the screen where the HTC logo sits. The LG G3 has improved on the design of the LG G2 and switched out the G2's shiny plastic battery cover for a removable brushed aluminum-look plastic. The HTC One (M8) is taller and thicker than the G3, despite having a 5-inch screen compared to the G3's 5.5 inches. The M8 is not as wide as the G3 though.

The One (M8) features front-mounted BoomSound speakers placed under speaker grills at the top and bottom of the screen, which is surrounded by quite large bezels. On the rear of the device lies a dual-camera setup, dual-LED flash and full metallic body. The power button is rather awkwardly located on the top edge of the tall device, alongside an infrared blaster. MicroSD expansion is available on the right side of the device just above the volume rocker. Both devices have an LED notification light.

The LG G3 is noticeably lighter than the M8 due to its plastic construction, but features a slim aluminum band around the edges. The color or the plastic battery cover is brought onto the bottom bezel on the front. The G3 has very small bezels around the screen, with a screen-to-body ratio of 76.4%. A speaker is mounted on the back at the bottom and at the top lies the ''rear-key'' volume rocker and power button with the camera lens on top, straddled by the dual-LED flash and laser auto-focus. The G3 also has an IR blaster and microSD is available inside the battery cover, where a removable battery also lies.

Besides the size difference, the quality of the screens is quite remarkable as well. The G3 has a QHD display with pixel density of 534 ppi. The One (M8) has a Full HD display with 441 ppi. Having said this though, the M8's display is crisp and vibrant and the added pixels in the G3 are not necessarily that noticeable unless you are looking at high enough resolution images or videos to really see it in action. The M8 produces purer whites than the G3 and is a little brighter overall. When seen side by side though, the G3 display looks simply huge: if you line up the top edge of the screens, the G3's display continues below the bottom of the HTC-branded black bezel on the M8.

Sense 6 vs Optimus UI. I'll leave your personal preferences to decide which interface you like best, but here's a few features of both. The G3 has a more modern looking interface with super flat icons and transparent app drawer. The One (M8) has the new Blinkfeed dedicated home screen on the left for social networks and news feeds, whereas the G3 has a combination LG Health/Smart Tips home screen. If enabled, Smart Bulletins will pop up occasionally on the G3 if inclement weather is on the way or you have other ''smart'' notifications that need attention, like clearing out unused apps.

Both devices have their own stock of ''bloatware'' apps: it's up to you if you find these useful or not, but the G3 allows you to uninstall some of them at least and has better pre-loaded app options than the M8. Both devices have a battery saving mode, but the One (M8) has the Extreme Power Saving Mode on top of a regular power saving setting. The G3 performs very well considering its QHD display, but the HTC One (M8) has great battery performance by default that is only increased by its EPSM. It's not the most user friendly power saving mode though, as you only have access to a limited number of apps without any customization options, but it certainly works. 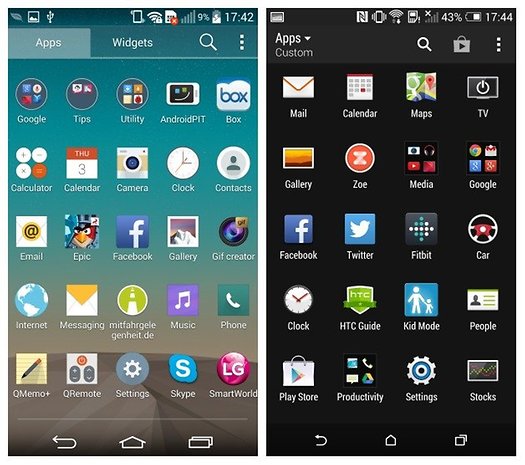 Both devices have very good gesture controls. The Motion Launch controls on the M8 allow you to launch a number of apps direct from a screen-off state, including the camera, where the G3 only allows some rather pedestrian reject call/silence ringtone gestures based on flipping the device or lifting it to your ear. Both devices support double tap to wake, but only the G3 can double tap to sleep. The G3 also has Knock Code as a security option which can be used to access the regular device as well as Guest Mode. The M8, incidentally, also has a Kids Mode.

On the specs front things start to get interesting. Both have Snapdragon 801 processors but the G3 has 3 GB of RAM (at least in the 32 GB storage version we used for the test) and a faster clocked processor and yet it is less speedy than the M8. The M8 is probably the fastest flagship device around right now. The M8 has a smaller battery capacity than the G3 but performs very well nevertheless. The G3's battery can of course, be charged via Qi wireless and also be easily removed and replaced with a spare; both options are not possible on the M8. Both devices come in 16 GB and 32 GB versions with microSD expansion, but the larger capacity G3 comes with 3 GB of RAM and the smaller with 2 GB. Both versions of the M8 come with 2 GB of RAM. The G3 speaker performs quite nicely but it is utterly unable to compete with HTC's BoomSound speakers.

The M8 camera had a lot of hype surrounding it before we finally found out that the Duo Camera was for picking up depth information that allowed images to be refocused after they were taken. The result is ok but the 4 Ultrapixel camera provides some pretty poor results. The 13 MP OIS+ camera on the G3 on the other hand is a very respectable camera that shoots very accurately. Auto-focus is insanely fast thanks to the laser auto-focus.

The G3 has minimal preset modes and settings – which could either be a bonus or a hindrance depending on your photography habits - but it produces solid results in daylight and up close, reproduces color well and handles high contrast in HDR well too. The M8 on the other hand has a nice clean camera UI as well with the same major settings plus some Zoe functionality built-in (''official'' Zoe Mode is coming via a software update in future). The best part of the M8 is the manual mode though, where you can control every aspect of the camera settings and you can also save your favorites. 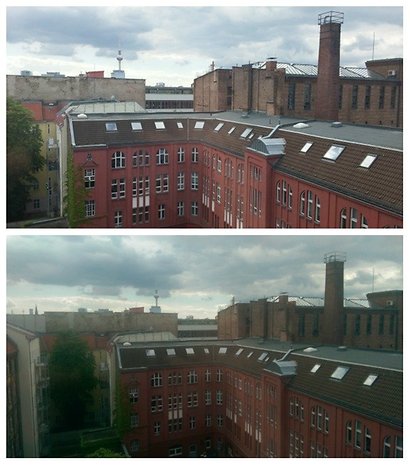 The G3 obviously produces much crisper results thanks to the added resolution of the camera, but the M8 has the G3 trumped when it comes to camera options. While the M8 camera works perfectly acceptably, even if the resolution is a bit of an issue, the G3 is clearly better. In auto mode the M8 produces lighter but slightly milky results. The M8 struggles with details although colors are ok and daylight shots are fine. In low-light situations though the M8 is average across the board whereas the G3 crisps up some sections and post-processes other sections, producing a weird patchy quality which doesn't work well in my opinion. The M8 certainly produces much brighter low-light photos though, even if they are grainier.

All in all, I think the G3 is the better device for what it manages to pack into such a relatively small and light body, even if the M8 is noticeably faster. Many of my colleagues prefer the One (M8) though for reasons we shared in our One (M8) review, so it's really up to what you like more: metal vs plastic construction, higher resolution camera or more camera settings, low-light performance, screen resolution, removable battery, the importance of gesture controls, speaker performance, speed of the system, look of the interface and so on. You really can't make a bad choice when deciding between these two devices, unless of course the deciding factor for you boils down to speed on the one hand and camera on the other.

Which device do you think is better? What are the best features of each device for you?