Play your favorite mobile games and make use of all your preferred mobile apps from the comfort of your desktop with this powerful Android emulator.Computer builds can get pretty powerful these days, even capable of fully emulating other powerful devices. There are plenty of reasons you want to try something in a virtual environment, and if you’re looking for a flawless emulator for generic Android devices, then XePlayer is just what you need.

Experience the Android OS on your desktop

First of all, you might want to be sure your computer is capable of running the application, because it might eat up some resources since it emulates an entire different operating system, which, in turn, can have other games and tools active. Moreover, your computer needs to have Virtualization Technology active, namely VT-x for Intel, and AMD-V for AMD processors.

Play games, try apps, and connect to the Internet

One particular sidebar function you find of particular interest is the keyboard control. It lets you create a fully custom keyboard right there on the screen, which can include additional control elements, such as a Gravity Sensor, GPS walking keyboard control, direction controller, crosshair, and more.

Needless to say that the application comes with its own settings, which in turn affect the emulator. Depending on your PC specs, you can tweak performance levels, display, and CPU usage. Interface settings, such as orientation, can be changed, as well as general options, like starting with Windows, or enabling root startup.

Things get a little more fun, if not enough already, when stumbling upon really familiar elements, such as preferred games and apps. You can directly connect to the Google Play store with your existing Google account, which means all achievements and other account bonuses are shared across all Android devices you associate with your user.

To sum it up, XePlayer can really make you think trick you into believing you’re using your tablet or smartphone instead of the PC. Performance is flawless, with neatly-designed and interactive menus, configurable controls, and an immersive Google Play experience.

Clash of Clans on XePlayer: 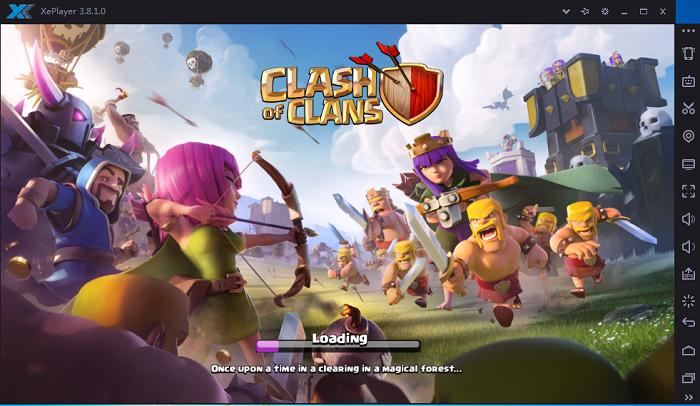