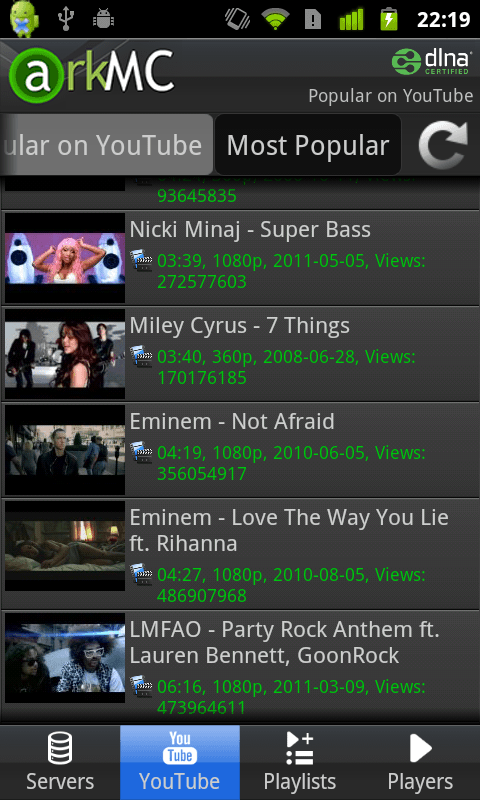 Play Google:
There are free and full version of ArkMC at Play Google.


EXAMPLE:
1) run ArkMC,
2) see the list of servers,
3) select Windows Media Player
4) select music file, or video file
5) play it either on Android device, or send it to TV

3rd party players support enables you to use standard android player, or any other installed player. This ensures that you can play a lot of different file formats.

YouTube support: with the help of ArkMC you are able to not just watch YouTube video on your device, but also to send YouTube video to another rendrers, and watch it for example on TV.

We are trying to make ArkMC application better and we would appreciate to have your feedback:
e-mail: arkmc(at)arkudadigital.com

• Digital Media Server (DMS)
o Makes itself available for discovering in home network;
o Exposing and distributing media content throughout the home network;
o Provides a browsable hierarchy of media resources and streams them on request.

1. How can I manage my home media network from ArkMC?

Start ArkMC. Application will automatically search for all UPNP/DLNA® servers and renderers available in the media network. Select a media file from DMS and send it to available DMR. You can control the playback from Now Playing Tab.

The reasons could be:
- your device is not connected to a Wi-Fi network;
- your network connection is not stable or your router is not working properly;
- if the other device is not DLNA-enabled, it cannot be discovered by ArkMC;
- sometimes, it is necessary to turn off the firewall on your computer. Make sure your consult a professional specialist before you make such changes to your machine.


3. Some media files cannot be played back on ArkMC DMR

We are currently using a standard Android embedded media player for a local playback, and a range of supported media formats depends on your Android device maker. You can change Ark DMR settings through a Player software option. You may choose any media player installed on your device which supports certain media files. Note, the 3rd party players cannot be controlled remotely.


4. Why do I have 3rd party media players available on my list of players?

The 3rd party media players on your list of players appear depending on what type of a media file you choose. Media server provides content type information, and then Android system interprets it and selects a list of 3rd party players supporting a playback of certain media file format.


5. Does ArkMC run in background while, for instance, I’m browsing the Web?

At this moment ArkMC does not support background behavior. This feature will be available in the future.


6. How can I send media files from Win Media Player to ArkMC renderer?

Select media file from a list on your Win Media Player. Click the right button and choose “Play to” option, then choose Arkuda DMR from the list of available renderers.


8. How long does it take to connect to a DLNA server?

ArkMC should be able to find servers and renderers in the network within 1 minute upon condition that the network connection is running well and consistent and the Wi-Fi router is capable of transferring multicast data packages.


9. Which devices are DLNA enabled?
You can find a list of DLNA certified devices in official DLNA organization website.
Reply
Scaproc
Forum posts: 41

Scaproc
Nice application. Works good with my Western Digital NAS.
Are you planning to add SUFFLE and RPEAT functions?
Thanks for the message.
Yes we are planning to add these functions.
Reply
Scaproc
Forum posts: 41

I'm waiting for these functions. Because I have couple of my favorite albums. I have listened them hundread times, that is why I want to suffle the.
Reply
ArkMCdev
Forum posts: 19

What else functionality are you interested in?
Reply
Scaproc
Forum posts: 41

ArkMCdev
What else functionality are you interested in?
Talking about pictures playback. Yes, I can watch pictures, yes, I can send picture to another device. But I want to be able to zoom picture, and I want to just swipe to move to another picture, not to go back to menu and select picture, and select where to play it.
Reply
ArkMCdev
Forum posts: 19

We will think on this. The problem is that DLAN standard doesn't support image zooming. But we will think what we can do. Probably it would be possible to add this feature to ArkMC so you would be able to do this when you watching picture on your Android device.
Reply
Scaproc
Forum posts: 41

ArkMCdev
We will think on this. The problem is that DLAN standard doesn't support image zooming. But we will think what we can do. Probably it would be possible to add this feature to ArkMC so you would be able to do this when you watching picture on your Android device.
Thanks, I will wait for the new version.
Reply
ArkMCdev
Forum posts: 19

Free version of ArkMC has DMR functionality.
So, If you have an old smarthopne you can use it as media center. You just have to connect it to Speakers and run ArkMC.
After this you can send there media. For example you can send music from Windows PC using Play-To function!
Reply
ArkMCdev
Forum posts: 19

We reccomed to use Foobar2000 server for music sharing.
Reply
ArkMCdev
Forum posts: 19

There are a lot of servers we have tried with ArkMC.
But the couple of ones we use the most are:
WMP - on Windows PC
XBMC - for Linux and MAC computers.

But I think that it is better to try couple of servers and selece what suits your needs the best.

I have tried couple of servers. I use Serviio on my PC. I like that it is easy to menage shared folders here.
Reply
ArkMCdev
Forum posts: 19

Scaproc
I have tried couple of servers. I use Serviio on my PC. I like that it is easy to menage shared folders here.
Serviio works good with ArkMC. And it is crossplatform. It is awailable for Windows, Mac and Linux systems!
Reply
Scaproc
Forum posts: 41

Yesterday I have tried to send YouTube video to my TV. But it is showing message, "unsuported format". What can I do with this?
Reply
ArkMCdev
Forum posts: 19

Sometimes TV players have very narrow file format supoprt. Maybe you can try to istall and use some other player?
Reply
ArkMCdev
Forum posts: 19

We will think on this porblem. Probably there is the way to provide YouTube support even for those TVs.
Reply
Scaproc
Forum posts: 41

I have updated the firmware of TV and now it works fine!
Reply
ArkMCdev
Forum posts: 19

Cool. Thanks for feedback. Sometimes updating something - is a good idea.
Reply
Recommended by NextPit