I started developing a game two months ago.
The principle of the game :
Two army of pawns struggle for victory. You must defeat opponent's King first to win the game.

It is available on google play on alpha version
Here is the link :
https: [slash][slash]play.google.com[slash]apps[slash]testing[slash]com.takyon.battle_royale

Here is a preview picture of the game : 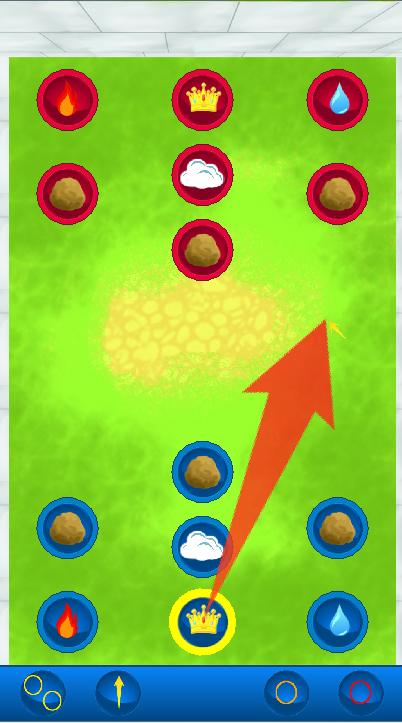 It would be great if you share some game play with us.

Yes you're right. In my initial post, I wrote that i didn't to tell more about the rules in odrer to see if the game would be intuitive.
What makes the game play particular is the way you attack : you cannot attack directly with a pawn,
you must use one of your pawns (the thrower) in order to throw another of your pawns (the attacker)
(like you would do in pool games with the white ball). Select a pawn by clicking on it, then do a drag & drop to define direction and strength of the shot.

When you click on the yellow circle in the menu bar, you can then throw two pawns simultaneously.
When your pawn has less than 25% of life, you can use a special ability after clicking on the red circle :
- the Fire pawn throws flames in a cone area
- the Water pawn increse his teammates' health point
- the Air pawn throws all his teammates who become attackers
- the Rock pawn increases his mass

Maybe I forgot some rules but that's the basics of the game play.

If you have more questions, I'll take time to answer.

Hi Anderson !
As I'm new in this forum, you must first send me a message in order I send you the link (btw, it is a good security process IMO ^^).

Looks like an interesting game. I really love strategy game it makes my head go crazy..

Yeah, me too. Playing Strategy Game makes us feel like we are playing some real games.