“Endless TD – Savior of the Humanity” is a new game in the genre of Tower Defense created by a young but very promising team Heart beat Games.
“One more TD” - that’s what you will probably think but it’s not like that, the developers have embodied in the game the mechanisms that you have not seen before. You can read more about the features of the game in our review.

Gameplay.
The first thing you will see entering the game is the President of survivor humanity who tells you about breakthrough of the enemy. 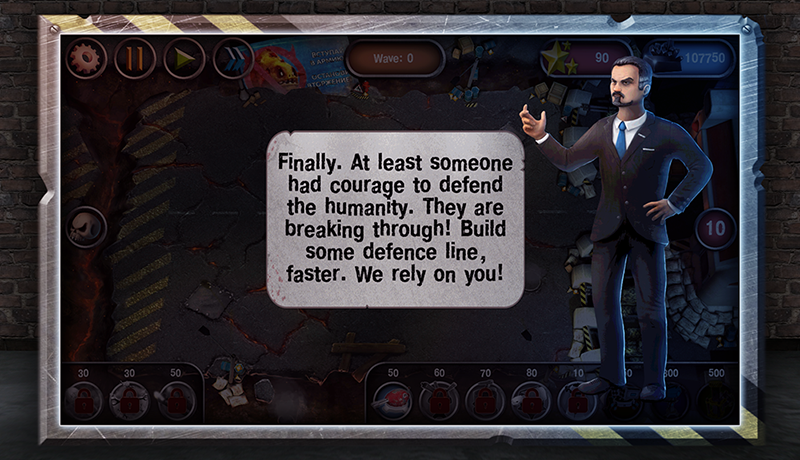 As it turns out later, an unknown enemy from another dimension has attacked the Earth. In a short period of time these bloodthirsty monsters have destroyed everything on their way except the bunker which you have to defend. For this you need to build defenses using defensive towers. If you have ever run some games of this genre, you will immediately feel at ease with it, because the game is friendly even for a newcomer strategist.
After passing a short training you will immediately notice the first feature of the game - an opportunity to put towers anywhere on the map. Such an option of building towers gives a huge number of possible variations of protection, you can construct a straight line but focus on it all the power of guns, you can build towers in a position of "a snake", or even build a labyrinth! 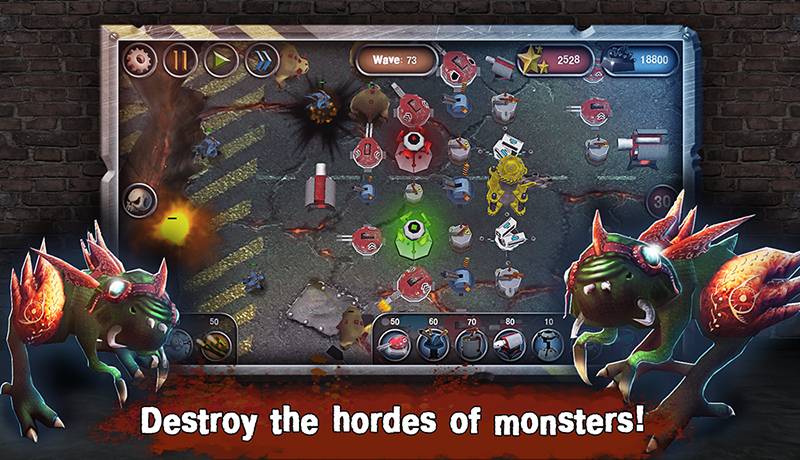 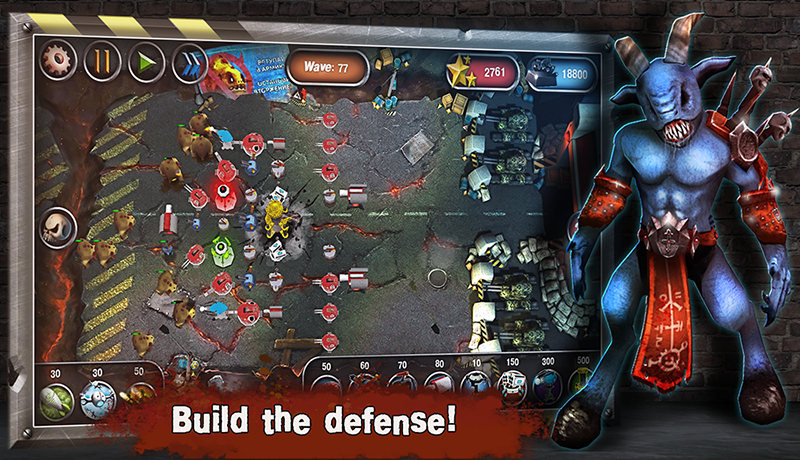 As the game progresses you will open up new towers that will increase the efficiency of destruction of the enemy. Combining different variations of the towers, you can increase your defenses but be careful – you should choose thoroughly a place where to install a tower on a map with an open place for construction.
The game won’t let you relax - already on the 5th wave the monsters crawl out of a break in different directions! This is another feature of the game, thanks to which the gameplay is not boring.
Then you are supposed to have another "surprise" - the developers have included in the game a full random of appearing of the enemies not only from different directions, but also by their type, as well as by ground and air waves. Thus, the player will have to observe the battlefield with great attention, rather than just placing a bunch of towers and waiting.
The game immediately makes you get hooked on it and you want to build more and more, but there is not so much experience given, so it should be used very carefully. Experience is one of the resources in the game; using experience you can build towers, use amplifiers and get skills. The second rare and expensive resource is nanometals. As you might guess, NM is a resource which you can get for real money or for free, for example, by viewing advertisement. No need to screw up your face, you can play without paid items and even save enough NM to buy paid towers.
The more waves you pass, the stronger becomes your enemy, and naturally the player has to become stronger. The game includes upgrades of towers, skills and shop with new technologies. Learning the skills you strengthen all the towers on the battlefield, as well as all the towers, which you will build in the future. 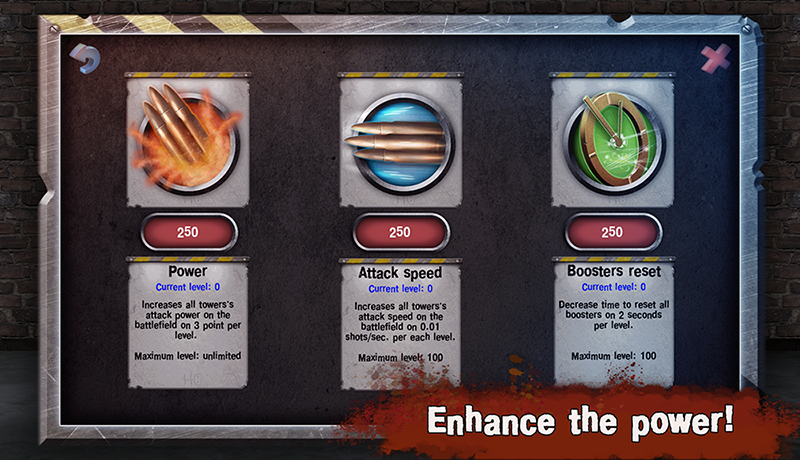 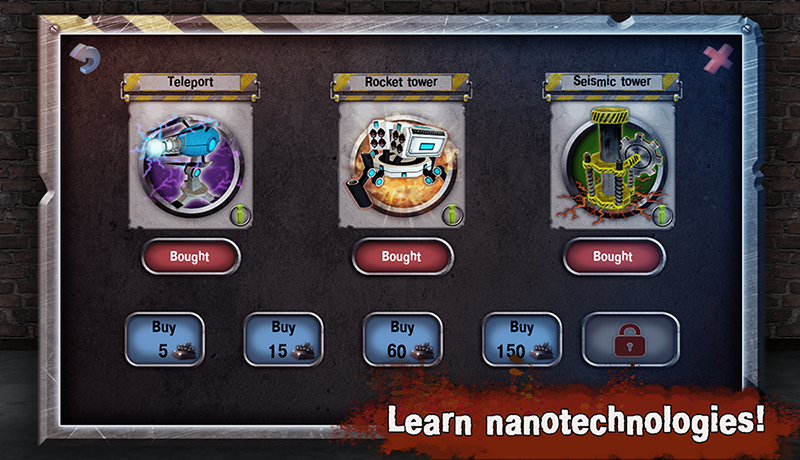 However, no matter how good strategist you are, sooner or later the boss, an incredibly powerful monster, will come out on the field and you will have to spend a lot of resources to destroy him. And in case the enemy manages to burst into the bunker and you do not have any life points, don’t worry, the game is not over. A mysterious girl, appeared in front of you, will offer you to send you to the past! 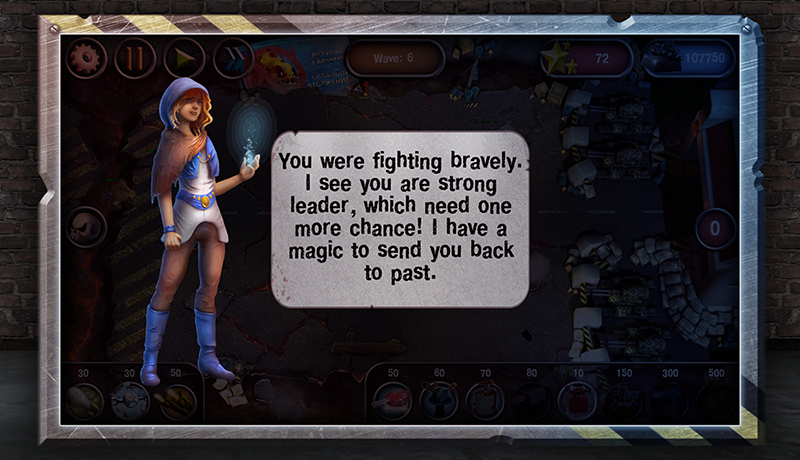 Here we are captivated by the game even more. With the magic of some mysterious forces you are sent into the past, meanwhile you lose all your gathered experience but not your learned skills, therefore, we advice you to learn them when you realize that you are about to lose. When you return to the past all the learned skills remain their level, which gives an advantage over the monsters during the next protection. You also get bonus experience for each wave passed successfully.

Game world, design, graphics, sound.
The game world is a total apocalypse, which clearly tells us that everything is very bad. The game has just one map but it is made with all the level-designer’s love, because on the map you can see a lot of interesting details and even Easter eggs. Burning rift, debris, chaos and destruction are only a small part of beautifully drawn map elements.
The game has several characters, which gradually bring us up to date and accompany us in the storyline, which is still a small one. There's also a mysterious character whose role is not disclosed by the developers, you can see it on the main screen. We can only guess about the purpose of his presence. I'm sure in the next updates, we will find out more about him.
The game looks just great on the 10-inch tablet computer. All kinds of special effects and beautiful animation together will create the very battlefield in your device! And if you play on a mobile phone, and the game looks "too small", just do zoom in the required place and you will be able to examine in details the enemy or reinforced tower of the level 15.
The game has a pleasant music, but there is not so much of it, most likely in order to save space, because the game takes only about 50 Mb. Well-chosen sounds help to know where a portal from the defeated enemy opens or when the boss comes out to the field.

Summary.
In the whole, the game looks very nice and it is interesting to spend time playing it. With a simple control of the game you will be able to protect the humanity on your way to work, in public transport or fill in an hour sitting in the queue. But it is pretty difficult to play it with one hand, it depends on how you can contrive. If you didn’t have time to pass a wave, just put the game on pause and continue it at any time convenient for you. The game is also automatically saved when each new wave comes, so keep calm - you won't lose your progress.
Endless TD is distributed as freemium application that means that it is absolutely free. The game provides in-game purchases but there's no need to spend huge sums like in another TD. The only thing that slightly spoils the impression is advertising banners, but as the game is absolutely free, one can put up with it.
One more advantage of the game is that having its beautiful interface it is not demanding to the specifications of your device. The minimum requirements for the game: 1GHz processor, 1GB of RAM and 50 MB of free space on the device.
The developers say that in future updates we will meet new challenges, which will add replayability to the application, as well as they promise to reveal us the story of a mysterious character. There will be added some other elements, but you will be able to learn about them later from the application page in Play Market or developer’s pages in social networks:

“Endless TD – Savior of the humanity” is an excellent game that will help you to spend an interesting evening. If you are a fan of strategies, especially of the genre Tower Defense, we strongly recommend you to try this application.
"Build the defense! Enhance the power! Learn nanotechnologies! Save the humanity!".

Find this game in Google Play!