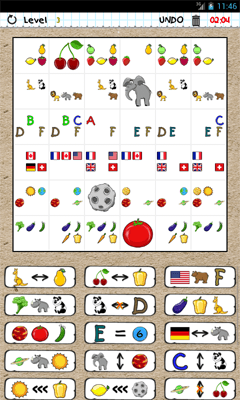 Zebra puzzle or Einstein's riddle is a logic game based on deduction.
It is claimed that only two percent of people can solve this riddle.

The goal of the game is to determine every picture in each group of pictures. Every group is represented as a row in a table. Eventually, each picture must occupy its cell in the table. The table can be 3x3, 4x4, 5x5 and 6x6.

Totally there are six groups of pictures:

There is also a number of clues at the bottom of the screen that gives you a hint about location of certain picture. Using these clues you will be able to resolve a whole puzzle.

Gradually eleminating impossible locations you will find the right ones.
When a clue gets unneeded it can be removed from the screen.

There exists one and only one solution of each Zebra puzzle.