I need an reference or explanation how to add favorites (important locations) in my Android app for Google maps. So far, I managed to display map, show my location and get address from point where user is tapped on map. I assume that this is done with overlay class, but how to get list of objects that I want to display?
Thanks
Reply
justJay
Forum posts: 757

Guess I'm still a little confused as to what you are trying to do.

Any contact that also has an address will show up when you open "Navigation" then contacts.

Well, I'm not trying to do that...
I need to show various locations on my map. That locations can be: museum, university, monument, etc. In fact, they are all shown on map, but not as an object, so tap on them does nothing...
This is how it looks in my app and how in Google maps: 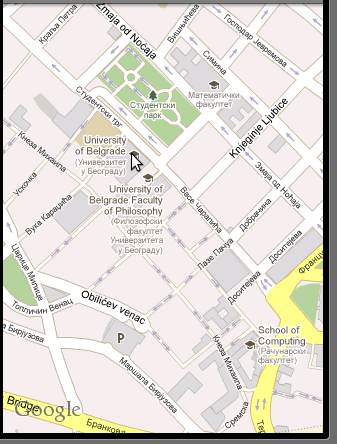 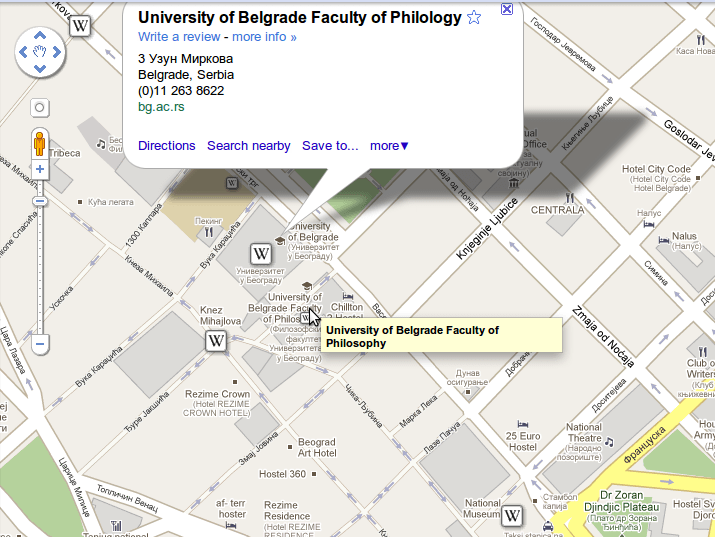 Check out the onTap method for the overlay class: http://code.google.com/android/add-ons/google-apis/reference/index.html

EDIT: Of course you could do most of the same stuff the google maps app does. From the GeoPoint information you could display the address when it is tapped. Put a :"Driver To" link on the map for them to click on, and then call the navigation app with an Intent, specifying the address in the parameters.

2nd EDIT: I wrote a small gps program once, here is the code I used to translate a lat/lon location to an address:

First you would get the lat and longitude from the GeoPoint provided in the onTap method of your overlay:

Then create a Geocoder object:


address="Could Not determine location."; //initinalize the address to not found

//Use android.location.Location to get an address from a geoCoder object.

android.location.Location locs = geoCoder.getFromLocation (lat, long, 10); // get the address for the lat and long from the GeoPoint

Jeremiah McLeod
Check out the onTap method for the overlay class: http://code.google.com/android/add-ons/google-apis/reference/index.html

I have onTap method implemented, and all I can extract is address, country, etc.
If that informations are proprietary to google maps app, then must be other way to get them, because I saw a couple of apps whit this functionality...
Reply
Jeremiah
Forum posts: 775

Your probably right, but I wasn't able to find it looking through the maps api reference. I'll look again and let you know if I find anything.
Reply
Douglas Carter
Forum posts: 1,891

Marko, have you tried contacting the developers of the apps that had the ability you want? As long as you aren't making a competing product, they might be able to help you.

Jeremiah McLeod
Your probably right, but I wasn't able to find it looking through the maps api reference. I'll look again and let you know if I find anything.
Thanks
Douglas Carter
Marko, have you tried contacting the developers of the apps that had the ability you want? As long as you aren't making a competing product, they might be able to help you.
In fact, I am... They did not reply me yet.

I explained them that my application is for final exam on faculty, and that code will not be abused.