Display
The LeEco Le Max2 has a 5.7-inch QHD display which provides an excellent gaming and media experience, on the other hand the Pixel XL is equipped with a slightly smaller 5.5-inch QHD display with the similar specs when it comes to display. Both devices have equally good displays. 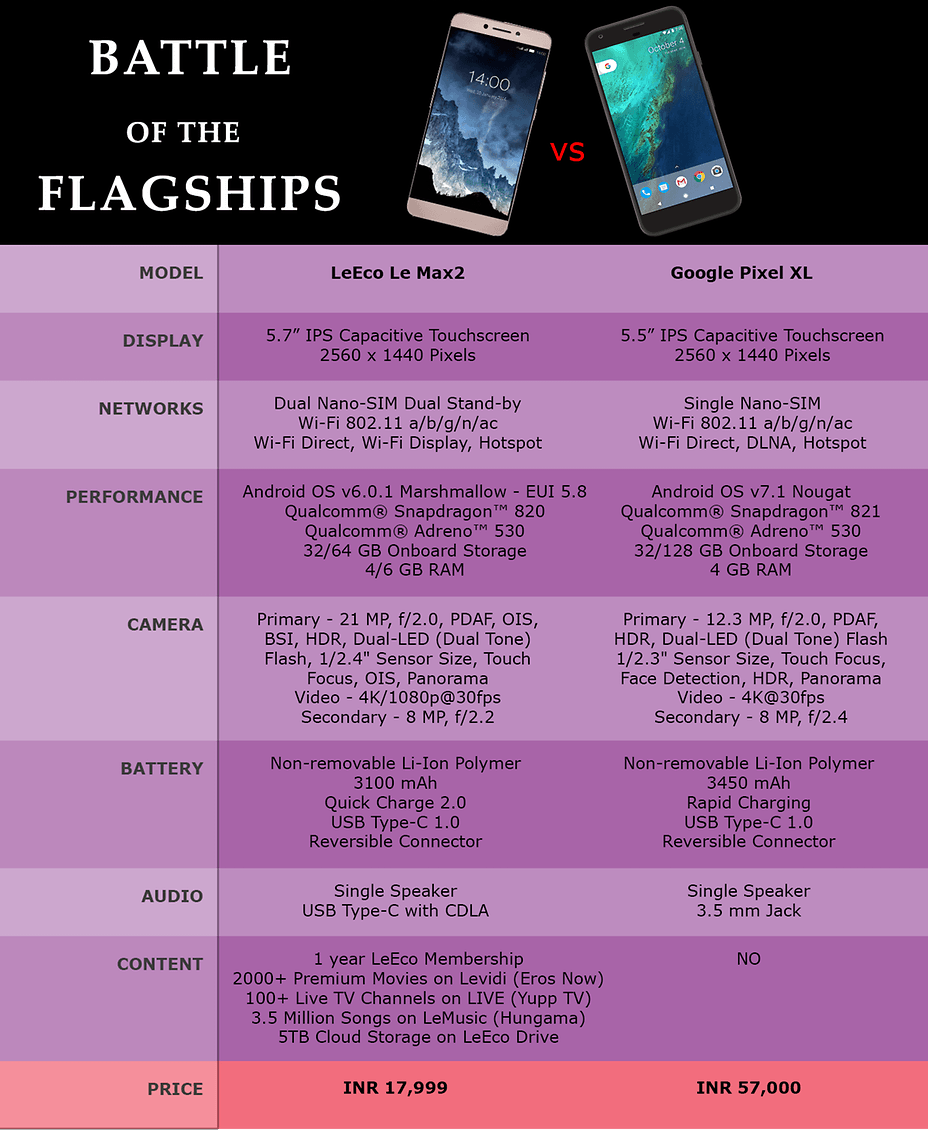 Networks
On the connectivity front, the Le Max2 supports Dual SIM with Dual Standby, 4G LTE, all the usual Wi-Fi networks and Assisted GPS. The Google Pixel XL supports all of the same except Dual SIM support.
Performance
The Le Max2 is powered by a Qualcomm Snapdragon 820 SoC which offers smooth and lag-free performance. It runs on Android Marshmallow and LeEco’s intuitive eUI. The Pixel XL takes a slight edge with the latest Qualcomm Snapdragon 821 and Android N.
As far as performance is considered, both phones do an amazing job - the difference between SD820 and SD821, in real-life usage is negligible. We chose to compare the least expensive variants of these phones, so both the Le Max2 and Pixel XL come with 4GB RAM and 32GB Onboard Storage. There are more expensive variants of both devices that come with more RAM or more storage.
Camera
The LeEco Le Max2’s primary camera is a 21MP affair with an f/2.0 aperture, PDAF, Optical Image Stabilisation, Touch Focus, HDR and Dual-LED Flash. It is capable of recording 4K video at 30fps and 720p slow motion video at 120fps. The secondary camera is a 8MP sensor with an f/2.2 aperture that captures really good selfies.
The Pixel XL’s primary camera has a 12.3 MP resolution, f/2.0 aperture, PDAF, Dual-LED Dlash with larger pixels (1.55µm pixel size), Touch Focus and HDR. It also supports 4K recordings at 30fps. The front camera is a 8MP sensor with an aperture of f/2.4.
Battery
The Le Max2 is equipped with a 3100 mAh Li-Ion battery and supports Quick Charge. On the other hand, the Pixel XL has a slightly higher 3450 mAh battery which Google says is powered by its own Rapid Charge technology. Both devices sport USB Type-C ports and non-removable batteries.
Audio
LeEco’s Le Max2 outputs audio via its Type-C port using CDLA technology which LeEco says is the first of its kind and offers amazing sound quality. It removes the traditional 3.5mm headphone jack entirely. The Pixel XL goes with the age-old 3.5 mm jack with no real upgrade on audio. While traditionalists might prefer the 3.5 mm jack, we wanted to see Google innovating in this area. Both devices have a single stereo speaker that works well.
Content
There is no competition for LeEco in this area as it has been a pioneer in the Internet Ecosystem space. Its LeEco Membership gives you access 2000+ premium movies on Levidi (through Eros Now) and the most amazing part is you can watch 100+ live TV channels on your phone from the LIVE App. Also, you can listen to 3.5 million songs on the go with Le Music and they also offer 5TB of cloud storage on LeEco Drive which is simply amazing. All this is free for one year! The Google Pixel XL does not offer any content and membership offers.
Price
LeEco has priced the Le Max2 aggressively at Rs. 17,999/- as a special festive offer. Google has introduced the Pixel XL at a whopping Rs. 57,000/- in India for the lowest variant. While we understand that their goal is to project the Pixel phones as a premium experience, that’s a lot of premium that has to come out of your pocket!
What We Think
LeEco’s Le Max2 is a clear winner in this battle. It has almost similar specifications as Google’s Pixel XL - the Pixel XL takes the edge in certain areas such as the processor and battery but in day-to-day usage, there won’t be much of a difference between them. Add in LeEco’s content offerings and its jaw-dropping price tag for the Le Max2, and it becomes